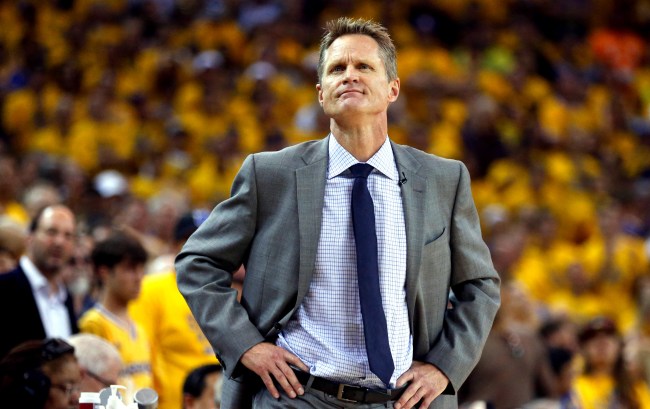 Golden State Warriors head coach Steve Kerr says that despite the unusual, shortened, interrupted season whichever team wins the NBA Championship this year should not have an asterisk next to their name.

This, despite the fact that his team is not one of the 22 that have been invited to continue the 2019-2020 NBA season at Disney World down in Orlando.

Speaking to Bay Area Sports 95.7 The Game, Kerr explained, “One thing I feel really strongly about is that a championship under these conditions is going to count. People are going to want to put an asterisk next to it.

“There’s no asterisk. In my mind, it’s going to be a brutally difficult journey to try and win a title.”

Kerr also said that he understands why the NBA is struggling with getting everyone on the same page for a season restart.

“There’s no easy answer. I think the only thing you can do is to do what the NBA has always done, which is to listen to listen to its players, communicate with them and collaborate,” Kerr said. “And I think that’s one of the great advantages that the NBA has over other sports, is that there’s a real partnership, especially when it comes to social issues.”

He added that while there’s been talk of some kind of summer league for the eight teams that won’t be playing in Orlando, he’d prefer that not happen, reports NBC Sports.

“We’re not interested in a summer league,” Kerr said earlier this month on a conference call. “If what we’re talking about is some kind of minicamp and some of the other teams are interested in playing games, we would not be interested in doing that.

“And I’ve talked to a couple of the coaches about that. Every team has its own unique set of circumstances, and I definitely understand that a lot of the teams involved are younger and more interested in getting game action for their players.

“But we’re in a different space and people understand that. We’d be more interested in practice time.”

And much like the rest of the sports world, Kerr is not at all surprised that Major League Baseball has been conducting its business like a monkey screwing a football.

“I don’t think this is that surprising that baseball is where they are right now.”

Steve Kerr on the state of the MLB (via @DRK957) pic.twitter.com/J5iKVLaJQi

“I don’t really know anything that you guys don’t, but I think there’s reason for both sides to want to get together and play, but I think for baseball there’s been sort of a looming labor crisis, you guys know that very well,” said Kerr.

“Over the last couple years, you could sense that coming, so between the pandemic and some economic issues, I don’t think this is that surprising that baseball is where they are right now.”

No, Steve. It is not surprising at all.