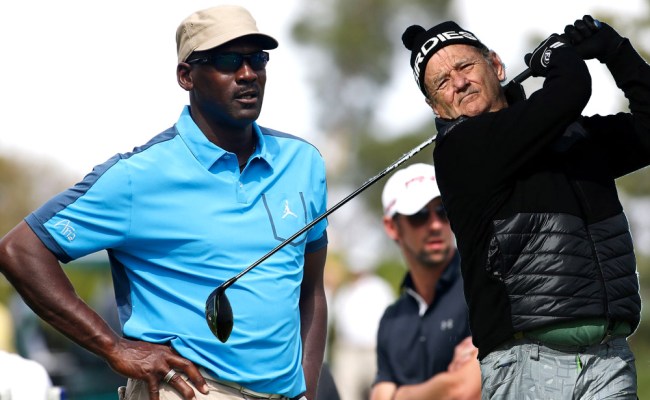 Two of the biggest name celebrity golfers in the world both happen to have ties to the city of Chicago. Bill Murray was born and raised there. While Michael Jordan has a statue of his likeness sitting in front of the United Center, home of the Bulls.

Earlier this week we heard a little bit about what playing golf with Michael Jordan is like when we got the chance to interview PGA star Dustin Johnson.

“You can see why he was like that, because he’s still super competitive on the golf course, even now,” said DJ about MJ.

Also this week, Bill Murray was interviewed by a couple of guys some people have heard of named Steve Kerr and Pete Carroll and he too talked about playing golf with The GOAT.

During his appearance on the Flying Coach podcast, which Kerr and Carroll are doing to raise money for COVID-19 relief, Murray talked about many things, including filming Space Jam and playing golf with Larry Bird and Michael Jordan, the similarities between sports and filmmaking, stories from the set of Ghostbusters, and how he got his start in comedy.

Embed from Getty Images
One of the stories he tells is how back when he was living in New York and had floor seats at Madison Square Garden for Knicks games, one time he was there with his two sons who were young at the time and Patrick Ewing was running full speed at them to retrieve a loose ball and when he noticed he was about to truck two small children he pulled up short and didn’t go after the ball.

“The largest person I know at the time, stopping short… that was athleticism,” said Murray.

Kerr, of course, had already chimed in that Dennis Rodman would have kept going.

Murray also shared how in between takes when they had like an hour to kill on the set of Space Jam, he, Jordan and Bird would go play golf.

“That’s when I realized that I did not want to play golf with Michael Jordan. Uh oh,” said Murray. “But it was fun to play with them and it was fun to goof around. It made it easier to shoot the scenes… I knew Michael some, just from being around the Bulls games, Larry I got to know. I took a little while, as you probably know, but he’s a delightful person.”

He also talked about how the fans crowd around at the pro-am tournaments he plays and how one time he hit “about three people in an hour.”

Listen to the entire episode below. It’s very good stuff.