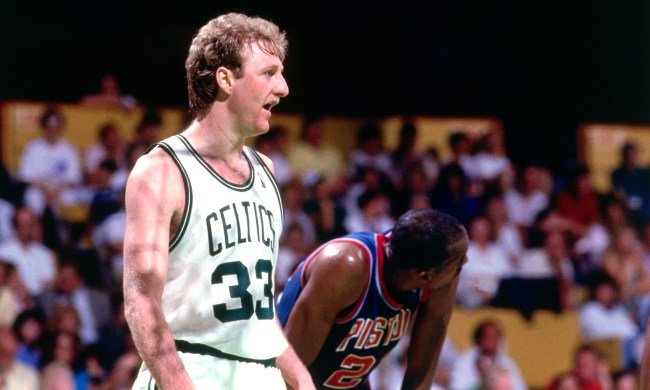 There have been some great trash-talkers in the storied history of the NBA. Kobe Bryant, Gary Payton, and of course, The GOAT Michael Jordan all immediately come to mind.

Heck, Jordan trash-talked the extras on the set of Space Jam, for God’s sake.

None of them, however, could do it as well as The Hick from French Lick, Larry Bird.

Don’t believe me? The lead for a story about Bird’s legendary trash-talk just published in The Athletic reads, “Michael Jordan once said, “Larry Bird is the greatest trash talker and mind-game player of all time. He taught me everything I know about getting in folks’ heads.'”

A couple of years back, Bird’s former teammate on the Boston Celtics, Kevin McHale, shared a ridiculous story about how Larry told the Phoenix bench what he was going to do for the final shot to win a game, went out and did it, and then yelled “told you so” at the Suns bench.

Incredible. But that’s just one story. The Athletic gathered up 17 of Bird’s teammates and opponents this week to share their best Larry Bird trash-talk story and they are also just as ridiculous.

Here are some of the best…

“My rookie year in Boston. He had the ball in the deep corner,” recalled Terry Porter. “I was sprinting to close out and he was in his famous form, and he shot it and as I was running out he said, ‘Too late, rookie.’ I didn’t even know he was a trash talker. I got to the bench and told Clyde (Drexler) and he was like, ‘Yeah, he does that all the time.'”

“I was guarding him my rookie year, he looked at me and he goes ‘you can’t stop me’…I looked at him and said ‘gosh, boy you’re so confident.’ He goes ‘Confident? You’re a rookie, you don’t know anything!’ He proceeded to score 10 straight points on me, coach took me out the game, he walks by and he’s laughing at me.”

“I was with the 76ers at the time,” Mike Gminski remembered. “We go up by one with about four seconds to go. They call timeout, get the ball at half court. Barkley is guarding Larry. Bird comes up to him and says, ‘You know who’s getting the ball, don’t you?’ Charles kind of nodded his head. Larry said, ‘I tell you what I’m going to do: I’m going to get the ball, take two dribbles down the baseline and shoot a fadeaway jump shot.’ I’m on the weak side. I’ve got McHale. Bird takes two dribbles down to the baseline, fadeaway jump shot, and the ball was halfway to the net and I just started walking to our locker room. I knew it was good.”

“This one time against Shawn Kemp Larry kept talking to him about how he’s the best fucking player from Indiana and then shot a three in his face and ran down the court laughing,” said Xavier McDaniel. “I think that was in ’89. I was pissed off because my mom called me and was like, ‘Boy, they said Larry Bird lit your ass up!'”

Another time that wasn’t mentioned in The Athletic article, the Celtics were playing the Pistons and Dennis Rodman was guarding Bird and he sank four straight shots. So Bird goes up to Pistons coach Chuck Daly and says, “Who’s guarding me, Chuck? Is anyone guarding me? You better get someone on me or I’m gonna go for 60.”

Of course this just made Rodman try even harder to guard Bird, but no matter how tight he played him Bird would shout at his teammates to pass him the ball “before they notice nobody is guarding me.”

Check out even more legendary Larry Bird trash-talking stories over at The Athletic.