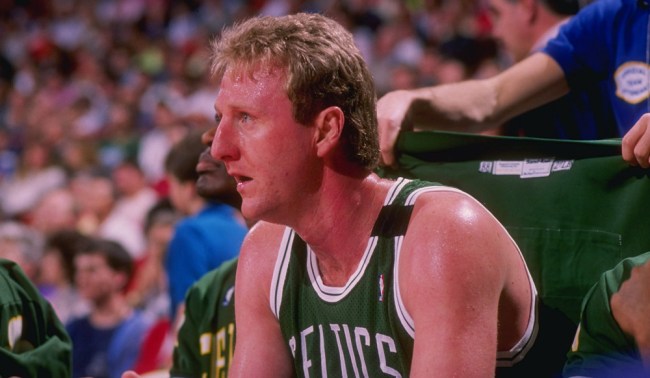 They didn’t call him Larry Legend for nothing. Much like his buddy Michael Jordan, Larry Bird was one of the most legendary trash talkers in the history of the NBA.

And this story told by Bird’s former teammate on the Boston Celtics, Kevin McHale, beautifully encapsulates how and why Larry Bird was so good at it.

During his appearance on The Dan Patrick Show, McHale shared one of what has to be a plethora of tales he remembers about Bird’s proclivity for both talking trash as well as backing it up like few others in sports. (Transcription by For The Win.)

“We were playing in Phoenix and we were way up, we were like 15 [up], and we have the worst fourth quarter in the history… we were terrible. And Larry’s bad. Larry’s missing shots, throwing it to the other team, throwing it in the third row.

And they come back, and somehow they go up two. So we have an out-of-bounds play, I’m taking it out and Larry says ‘I’m going to bust off the play and I’m just going to shoot a three.’

We’re down two. I’m like ‘no, don’t do that. Let’s shoot a two, please. Go to the hole, try to get fouled. Let’s just get into overtime, see if we can’t win this game.’

And he gets the ball, jumps out, busts the play, gets the ball at the slot, shoots the ball. As the ball is in the air, he kind of turns toward the Phoenix bench and yells ‘told you so,’ and starts running to the locker room. It went in.”

LeBron and Steph and the rest of the top players in the NBA now are nice, but there will never be another player like Larry Bird. He was and is truly one of a kind.

Listen to McHale tell the story below…