Pete Carroll Tried Luring Peyton Manning To Seahawks In 2012, But The QB Stood Up The Head Coach’s Meeting Request 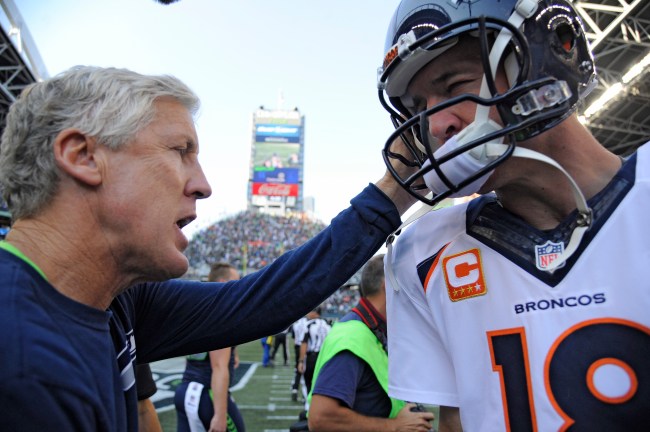 Remember when Peyton Manning was one of the most desirable free agent quarterbacks in NFL history back in 2012? The future Hall of Famer had just been released by the Indianapolis Colts — who were about to select Andrew Luck No. 1 overall in that year’s NFL Draft — and was on the hunt for a new team. Naturally, anybody with any salary cap room was linked to Manning, with the signal-caller ultimately signing with the Denver Broncos, whom he led to a Super Bowl 50 victory in his second season.

But there’s another team who was red hot on Peyton Manning’s trail; and, had they actually gotten him, it could’ve changed the entire landscape of the NFL. That team? The Seattle Seahawks, who were still a couple months away from choosing Russell Wilson in the third-round of the 2012 draft.

As the story goes, Seattle head coach Pete Carroll was all about recruiting Manning to the Pacific Northwest, and inquired hard AF about the two getting together for Carroll’s recruiting pitch. Hoping to get a face-to-face with Peyton, Carroll was planning to fly to Denver to try one last ditch effort to lure the quarterback to his team. As Peter King told it to SI.com’s podcast The Record, that’s where things got really awkward.

The wildest part of the story includes Carroll flying to a small airport in the Denver area that is a couple minutes from the Broncos’ facility. Manning was staying with old Colts teammate Brandon Stokley in Denver as he weighed his options. Manning told Carroll “he really didn’t want them to” fly to Colorado, King said. Carroll flew out anyway. It didn’t go well.

“Manning didn’t go meet Pete Carroll,” King said on “The Record.” “Pete Carroll flew to Denver chasing Peyton Manning and Manning never met with him. He got back on the plane and just flew back to Seattle. It was really kind of a crazy time.”

King said Carroll came on his own, and that didn’t help.

“[Manning] almost put off by the fact that you spent all this time and energy and fuel and whatever to come down here when I told you, ‘It’s not going to happen. I’m not doing it,’ ” King said. Carroll tried and failed. And it turned out really well.

Talk about a major league diss by Peyton Manning. Like, that shit’s colder than ice, right there, with Pete Carroll not only told to avoid the trip to Denver, but, when he did show up in an aggressive attempt to meet with the quarterback, being deliberately denied. It’s like the loser who waits all night to get into the hottest club in town, only for him to be pushed away by security once he gets to the door for not looking the part. Ouch.

Ultimately, things worked out for both Seattle and Denver, with each team getting their franchise signal-caller. The Seahawks ended up defeating Manning and the Broncos in Super Bowl 48 — where Wilson led them to a blowout victory — while Peyton ended up hoisting the Lombardi Trophy in Super Bowl 50. Still, it’s pretty incredible to play the “what if…?” card here, because if Carroll had been able to lock up Manning via free agency in 2012, who knows if they ever draft Wilson in the first place.