PGA Star Dustin Johnson Chats With Us About Playing Golf With MJ, Tournaments With No Fans, The Match, And More 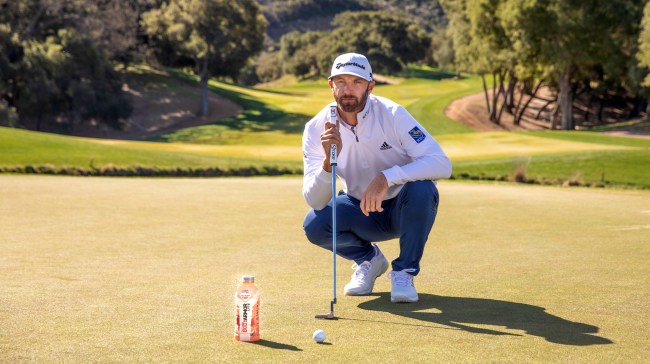 As we inch closer and closer to the return of the PGA Tour the weekend of June 8-14 with the Charles Schwab Challenge in Fort Worth, Texas, we had a chance to chat with the 2016 PGA Tour Player of the Year Dustin Johnson about what he has been up to since the PGA Tour shut things down in March, who he likes in this weekend’s The Match event, competing in tournaments this coming summer with no fans, the Masters moving to the fall, his experience playing golf with The GOAT Michael Jordan, and more.

Good morning. Still keeping busy even though you don’t have tournaments to play?

Oh yeah, trying to, yeah. I just got to the golf course right now. About to practice and play a little bit.

So how much of a change has it been for you these last few months?

I mean, it’s definitely been something we’ve had to adjust to, but it’s a strange time for everyone and everyone’s trying to adjust and adapt, but for what I do it hasn’t been too different. I’ve still been able to train… a couple golf courses, not in Palm Beach County, but in Martin County, The Floridian, which I’m a member at, they’ve been open the whole time. So I’ve been able to practice a little bit. I didn’t practice a whole lot, just because everything was kind of up in the air when we were going to start, if we were going to start… but now it looks like we are going to start the second week of June, so I’m starting to ramp things back up a little bit.

Speaking of getting things started back up, who are you picking in The Match this weekend?

I think it will be a close match. If I gotta pick, I might take Tiger and Peyton. And the only reason is because Medalist is Tiger’s home course, so, maybe give him a little bit of the edge.

Think they will be a little rusty?

Nah, I doubt it… I mean, maybe… everybody’s going to be a little bit of “competition” rusty. It’s always different playing in a competition than it is just going out and practicing. No matter how you do it, it’s very difficult to simulate comeptition when you’re practicing. You know, what it’s like playing in a tournament. It’s hard to simulate that kind of atmosphere.

Yeah, you don’t have thousands of people around you when you’re practicing.

Right? Just friends and family. On the subject of being different, the Masters being played in the fall, what do you think about that? Are you looking forward to that or prefer it back in the spring?

Hopefully you’ll have fans by then.

Hopefully. That would be nice. Because it would definitely be strange playing the Masters without fans.

So you’re involved in this BODYARMOR campaign, have you had any chance to interact with athletes from other sports?

I did get to interact with some of the guys on the BODYARMOR team. Obviously it’s great to be involved with these great athletes – kind of celebrating athletes on every level. The campaign is trying to inspire people to keep getting better, and obviously, only you can make yourself better. So I think it’s a great campaign, BODYARMOR is a great company I’ve been involved with for several years and it’s a part of my daily routine. Hydration is key for all athletes, for every athlete it’s huge. For me, being out in the sun, walking, sweating all day, staying hydrated is very important so you can still have that energy at the end of your round to finish off the round strong.

Speaking of finishing strong, did you watch The Last Dance?

I did. I’ve watched eight episodes. I still have to catch the last two, but, yeah, it’s unbelievable. I’m fortunate enough, I know MJ very well, and I have played a lot of golf with MJ, so just to see that side of him when he was playing and competiting is really cool. You can see why he was like that, because he’s still super competitive on the golf course, even now.

I would imagine. That doesn’t go away.

No. I don’t think it ever goes away.