Rory McIlroy Explains How Dustin Johnson’s Greatest Strength Is The Fact That He ‘Doesn’t Care,’ And It Makes A Lot Of Sense 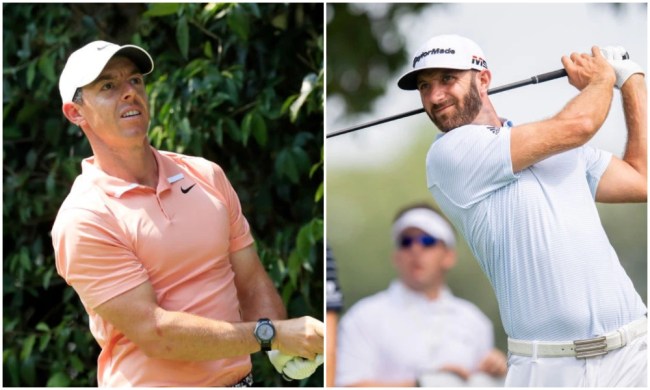 Dustin Johnson has been a Top 5 player in the world since the middle of the 2016 season, has 20 PGA Tour titles, is a U.S. Open champion and has finished runner-up in each of the three other majors in the game.

His resume absolutely speaks for itself, but one of the gaffs that people have with DJ is his laid back attitude. While there is no denying that he cares deeply about the game and his career, he can certainly come across as a guy that couldn’t care less, and I think that’s how he likes it.

While you can complain about his super laid back attitude, Rory McIlroy thinks that it’s actually DJ’s greatest strength.

McIlroy is getting set to team up with Johnson to take on Rickie Fowler and Matthew Wolff in a charity match on Sunday and during a pre-match teleconference, the world’s No. 1 player explained that he loves the fact that Johnson ‘doesn’t care.’

“Every time I think of DJ and his game, I always think of the same thing. I don’t want this to sound in any way disrespectful, but I love how he doesn’t care,” McIlroy explained. “I love how he could forget a bad shot and can forget a bad round. He really takes everything in his stride. He doesn’t get too high. He doesn’t get too low, and I think that’s one of his greatest strengths is the fact that he is like that.

“They say in golf that you need a selective memory, and he’s definitely got that. Any sort of setback is like water off a duck’s back for him, and that’s probably his greatest strength.”

McIlroy’s take here is both honest and pretty eye-opening. What makes DJ DJ is his ‘I don’t care’ attitude, while you can certainly make the case that he should have a few more wins under his belt, the moment never seems to be too big for him.

A perfect example of Johnson being one of the most laid back players maybe ever? During the teleconference, he explained that he hadn’t played a real round of golf since The Players was canceled back on March 12.

Dustin Johnson says this past Sunday was the first time he’s actually played a round of golf since The Players was canceled.👀 #TaylormadeDrivingRelief

Even the 23 handicappers of the world take a casual Saturday round too seriously and the fact that Johnson can continue to seem so nonchalant on the game’s biggest stages is pretty remarkable.