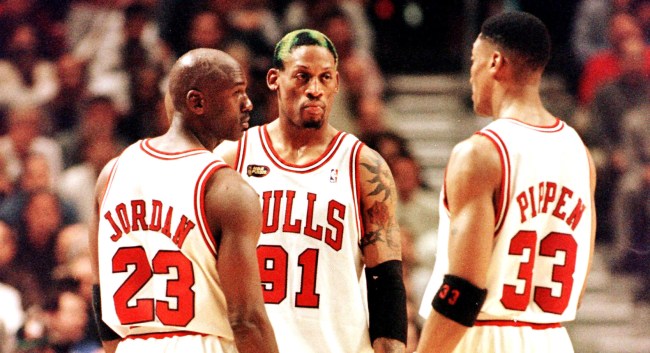 Hard as it may be to believe, not everyone loved the 10-part ESPN documenatary series The Last Dance about Michael Jordan and the 1997-98 Chicago Bulls. Counted among those people are some of Jordan’s former teammates on the Bulls during that time period.

Over the past few weeks we have heard about Scottie Pippen being reportedly “livid” about how he looked in The Last Dance, Horace Grant calling MJ a liar and a snitch for how he was portrayed, and Craig Hodges complaining about, well, almost everything.

Frankly, as bad as Pippen and Grant did look at various points in the docuseries, the one person that really could have been upset at his portrayal is Dennis Rodman.

While many fans who watched The Last Dance appreciated The Worm’s, uh, free-spiritedness, there is another section of fans who found his actions unprofessional and irresponsible. And they would have every right to feel that way, because, well, that’s certainly been Rodman’s M.O. over the years.

However, you’re not going to hear him complain about how he was portrayed in The Last Dance, and Rodman has zero time for his former Bulls teammates who have been whining about the way they were made to look over the past few weeks.

Embed from Getty Images
During an appearance on Good Morning Britain this week, Rodman said about his portrayal in the series, “It was amazing to see the documentary. You saw Michael Jordan and Phil Jackson… I went to them and I said, ‘You know what? I need to take a break. I need to go to Vegas for a weekend. … I need to get my mind right.’

“I didn’t need that. I just wanted to get that. Phil Jackson said, ‘Let him go, let him go.’ Michael said, ‘If anyone needs a vacation, I do.’ Michael said, ‘Go ahead,go ahead,’ and it was supposed to be 48 hours. Of course I didn’t take 48 hours. I took like four days.”

When Piers Morgan asked Rodman about the moment in The Last Dance when Jordan got emotional talking about why he was so demanding of his teammates, Rodman replied, “He didn’t really pull me on that because I had already that will to win because I came from winners in Detroit and San Antonio. And I got there as well I was the missing piece to them.

“I think the players in the first three-peat were a little upset because they felt Michael was throwing them under the bus. ‘You guys wasn’t doing what I want you to do, okay, great. I’m the greatest, and I’m determined to win no matter what. Whatever it takes I’m gonna do do do’ and the next thing you know Michael starts to talking about his old teammates and the teammates I played with, I think it sensed a chord with them because mentally, I don’t think they were strong enough to handle that, because Phil Jackson is more like a laid back coach. ‘Okay, go out there and do it guys. Go out there and win.’ Mike was more like, ‘Hey, if we ain’t gonna win, screw you, I’m gonna go do it. Watch me be famous.’ For me, I didn’t care because I was already famous.”