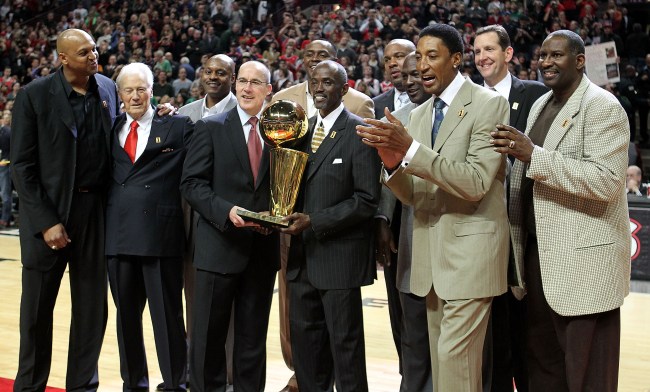 Michael Jordan and Craig Hodges have always been oil and water.

Hodges, who won two titles with the Bulls, was an avid activist who once tried to convince Jordan to boycott the NBA Finals to shine light on racial injustices. Jordan called him “crazy.”

Hodges wore an all-white dashiki to the White House after the Bulls title and delivered an eight-page letter to the staff of President George H.W. Bush about discrimination. Jordan bailed on the White House to golf with a man later convicted of money laundering.

Hodges was part of the old Bulls team Jordan dubbed as a “cocaine circus.”

Hodges is now taking issue with how Jordan is handling the professional and personal assessment of his teammates in The Last Dance doc.

“One of the things as players we call this a fraternity. So I’m watching the first episode and I was upset about the ‘cocaine circus.’ That bothered me because I was thinking about the brothers who are on that picture with you who have to explain to their families who are getting ready to watch this great Michael Jordan documentary event and they know you’re on the team, and now you’ve got to explain that to a 12-year-old boy… Then the Scottie Pippen part. Scottie was ‘selfish’. C’mon man, c’mon. And then last night with Horace, that hurt me. I’m letting MJ know that that ain’t right, dude. Horace did not deserve to take the fall for ‘Jordan Rules’. If MJ knows something else and knows Horace’s motive, then tell us how Horace did it for my sake, because I’m your teammate brother, just like they are, and I’m kind of salty how everybody got interviewed but me.” [via Chris Broussard]

Jordan called out Horace Grant for allegedly providing ugly details to an author of the tell-all book ‘Jordan Rules’ about the team during the mid-90’s. Jordan also nearly projectile vomited at the thought of Bill Cartwright taking the game’s final shot. He called Scottie Pippen a little bitch with his eyes in between pissing on Jerry Krause’s grave.

No one is safe in The Last Dance. FEED ME MORE.

Still waiting for Craig Hodges to be mentioned in #TheLastDance pic.twitter.com/lKRCmDTJTD