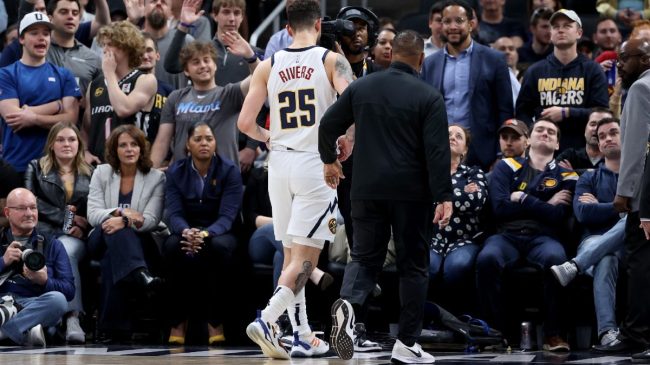 The Nuggets are looking to continue moving up the NBA playoff standings while the Pacers’ season is all but through. Denver would up winning the high scoring affair, but they were forced to do it without the help of one key reserve.

Austin Rivers landed a technical foul after seemingly throwing an elbow to the chin of defender Lance Stephenson. The jab also resulted in an ejection.

Austin Rivers got a tech and was ejected for faking an elbow at Lance Stephenson. pic.twitter.com/oLlV2jAm4W

But upon further review, Rivers never actually made contact with Stephenson. Though it was a nice piece of acting from the Indiana guard.

Of course, it’s not the first time Stephenson has been involved in this sort of thing. There was the infamous ear blowing incident with LeBron James. He was also called a ‘clown’ by JR Smith for his antics in a 2018 playoff game, which led to a LeBron ejection.

Now, he’s gotten another NBAer successfully kicked out of action. Rivers wasn’t happy with the bogus call, and most of the NBA world seems to agree.

After the game, Rivers took to social media to blast officials about the ejection. He said he’s never been thrown out for something “more ridiculous” in his life.

Never in my life have I been thrown out of Game for something so ridiculous. Seriously…never😂. League gotta look at this one.

Austin Rivers got ejected for… raising his elbow?pic.twitter.com/SjuU1wMJ6N

Austin Rivers got ejected for THIS.

Of course, Lance Stephenson was a part of it 😂pic.twitter.com/xr0MrSAjmx

Did this warrant a technical?

"I'm hopeful that Austin's able to get some money back."

Michael Malone says #Nuggets will definitely talk to the league about Tony Brothers' call to eject Austin Rivers. Malone told Brothers there was no contact, Brothers said it was a "malicious" act that didn't need contact.

Austin Rivers was ejected for this 🤔 pic.twitter.com/LpH3FrqG5W

Austin Rivers getting ejected for faking an elbow at Lance Stephenson is softer than _________pic.twitter.com/5kDwwDtHQv

Austin Rivers just got ejected for THIS?? He didn’t even make contact with him?? pic.twitter.com/2TfGarmxwf

The poor officiating cost Rivers the second half of action. Luckily, it didn’t affect the outcome of the game. Denver sits in fifth place in the Western Conference with just five contests remaining.