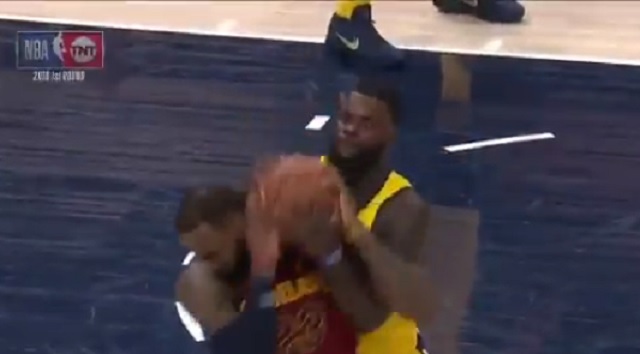 During game 4 of the Pacers-Cavs series, Lance Stephenson was in peak form annoying the shit out of LeBron James for the entire game. It seemed like LeBron was fed up with Lance’s antics early on in the game when he shoved the Pacers guard.

LeBron is fed up with Lance..then hits him with the booty bump pic.twitter.com/uQT5DxemOX

In the fourth quarter Lance was able to finally get LeBron to bite when he was able to draw the Cavs superstar to earn a technical foul for shoving him.

After years of trolling LeBron, Lance finally pissed him off at the right time pic.twitter.com/vlztKBl5cE

After the game, LeBron blasted Stephenson for acting and overselling the shove.

LeBron James on altercation w/ Lance Stephenson: "I should have never gotten a tech in the first place. It's a timeout called, this guy is fouling me to my bench. I give him a little nudge and he falls to halfcourt. Come on." pic.twitter.com/QvBfDhbx5R

“I should have never gotten a tech in the first place,” James said. “A timeout was called and this guy was following me to my bench. I give him a little nudge and he falls to half-court. Come on.”
“I should know better,” he said. “I’ve been dealing with this since elementary [school]. It’s like I tell you a joke and then you laugh and you get caught. That’s what happened. Lance told me a joke, I laughed and the teacher caught me. Now I have to go see the principal. That’s what happened.”

The game ended with a controversial play involving Stephenson and LeBron’s teammate, JR Smith, went on to call Stephenson a “straight clown” for his behavior during game 4.

This series is so good.