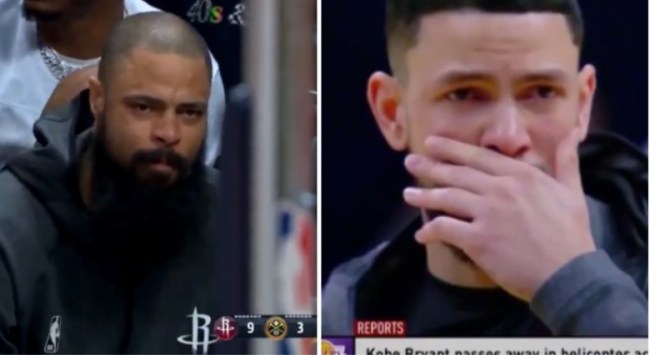 This afternoon we learned of the tragic deaths of Kobe Bryant and his daughter Gigi, who both died in a helicopter crash while on their way to a basketball camp.

BREAKING: Kobe Bryant died in a helicopter crash in Calabasas Sunday morning. Kobe was traveling with at least 3 other people in his private helicopter when it went down. Emergency personnel responded, but nobody on board survived. https://t.co/EG9YHW07hv pic.twitter.com/FkgfyvHlnc

Sources: Kobe Bryant was on his way to a travel basketball game with his daughter Gianna when the helicopter crashed. Those aboard the helicopter also included another player and parent.

Many NBA players learned of Kobe’s death right before some of their games that had early tip off times on Sunday.

Rockets’ guard Austin Rivers was one of the players who learned about Kobe’s death as he was getting on the court to play a game vs the Nuggets and he was visibly shaken by the news.

Man that Austin Rivers reaction to hearing the Kobe Bryant news that they just showed on NBA TV is heartbreaking. pic.twitter.com/Ardt55kxmH

Kobe’s former teammate Tyson Chandler was also emotional on the bench during the game.

Tyson Chandler clearly heartbroken. Not sure how these players are able to focus on the game. #Rockets pic.twitter.com/QlO0ByjsEI

The NBA should have probably cancelled all games today to allow players to grieve in private.