Crikey! Hungry Croc Swims Up And Snatches A Fish Off The Beach From An Angler Who’d Just Reeled It In 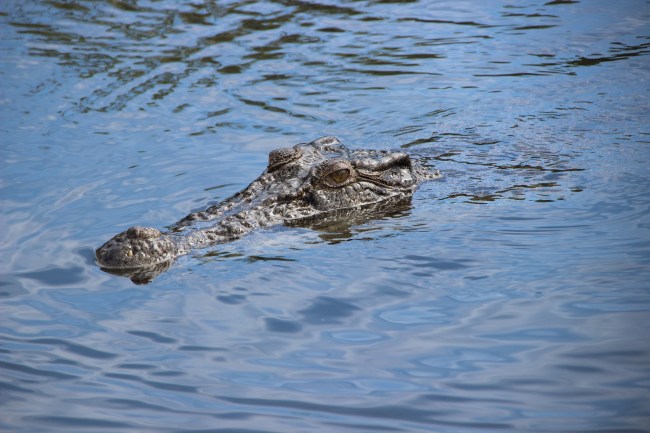 Australia’s Kakadu National Park is crocodile country. This MASSIVE park located in Australia’s Northern Territory is the largest of their National Parks with a total size of 7,646 square miles and it’s home to countless creatures including Kangaroos, Dingoes, Wallaroos, Wallabys, Bandicoots, Dugongs, and YES, these are all the real names of animals and not just shit I’ve made up on the fly.

There are 117 species of reptile in this national park including both Freshwater and Saltwater Crocodiles, these two species can be easily distinguished because the Freshwater Crocs have a narrow snout and a single row of four ‘scutes’ (boney lumps) behind the croc’s head. The saltwater crocodiles can also grow 2x the size of the freshwater crocs.

Here, we see an angler fishing for Barramundi, an Australian fish that looks like a cross between a Snook and a Speckled Seatrout here in America, and after she reeled in the Barramundi a hungry ass crocodile followed her and the fish up onto the beach where the croc promptly stole the Barramundi right off of her hook and made out like a bandit.

This clip was shared on Facebook by Savvy Social and in it, you can hear the angler freaking out with an ‘OH MY GOD’ as she backs out of the frame.

I recently had the chance to eat Barramundi for my first time a few weeks ago and it was delicious. Even though this is an Australian species, there’s a huge plot of land in South Florida somewhere near The Florida Everglades where you can fish for this species and it’s also farmed there. I’d been seeing this fish caught and shared A LOT on Instagram and tracked it down.

If you want to catch one of these fish yourself and have it potentially eaten by an alligator in an attempt to recreate this viral moment you can check out ‘Osceola Outback’ fishing which offers a Barramundi package.

According to For The Win, this incident went down at Cahills Crossing within the National Park and this is an area that’s well-known for crocodile sightings and ‘even attacks on humans’ so while this scene might look insane it’s probably not all that out of the ordinary for these Aussies in that region.