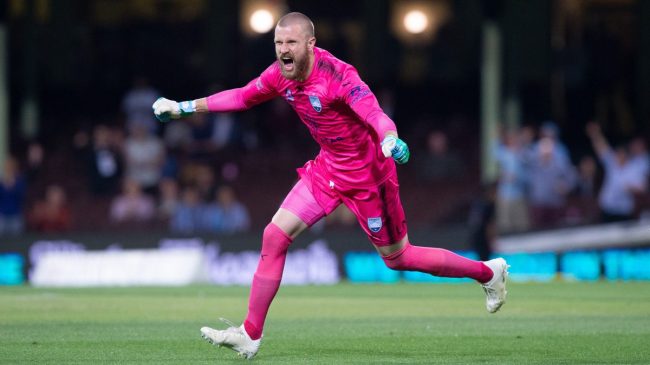 Australian goalkeeper Andrew Redmayne has become a social media sensation after making the game winning save to send his country to the World Cup.

In Australia’s win over Peru, the two teams ended regulation with the score knotted at 0-0. While the scoring was kept to a minimum over the first 120 minutes, the foes would soon get into a shootout on penalty kicks.

That’s also when the backup, Redmayne, was subbed in to take over in the net. He’d make two fantastic stops to help his team land the win.

In the process of making those saves, Redmayne was seen using some interesting tactics to throw off his opponent. In between penalty shots, the keeper flashed his dance moves, jumping and flailing in between the posts.

A star was born today ✨🇦🇺

It was just Redmayne’s third appearance for Australia, and again, he didn’t enter this matchup until the 120th minute.

Now, he’s gone from an unknown to a hero in a matter of minutes. Pretty unbelievable.

Redmayne's reaction after making the save to send Australia to the FIFA World Cup is priceless 😂🇦🇺 pic.twitter.com/ZPWJT6ArDR

The fantastic performance had everyone on social media talking.

The save, along with the constant dancing in the goal caused quite the response from the soccer world. Many noted Redmayne’s moves in between penalty kicks.

Others reacted to the monumental save that sends Australia to another World Cup.

Redmayne commented on the win after the game. It’s safe to say he’s excited for the opportunity to further represent his country.

Andrew Redmayne reacts to a historic night for @Socceroos 🙌 pic.twitter.com/iHA5MtilHM

An absolutely awesome moment from the unlikeliest of heroes.