Baker Mayfield Breaks Down Video Of Being Tackled By A Cop, Crushes Colin Cowherd’s Hot Takes 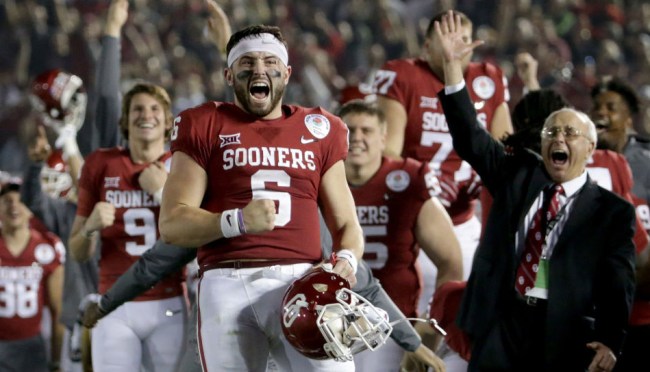 Cleveland Browns number one overall pick Baker Mayfield made up with his nemesis Fox Sports 1 radio host Colin Cowherd during an appearance on his show on Thursday.

Just kidding, Mayfield and Cowherd went at it hard with the former Oklahoma Sooners walk-on scoring his first W since becoming a professional football player.

As you may recall, Mayfield and Cowherd have not been fans of one another since before the NFL Draft when, among other things, Cowherd called Mayfield “pudgy.”

Marginal size and athleticism isn’t a NUMBER ONE pick. In any draft. In any sport. https://t.co/U74000ndM2

Well it happened bud. Have a nice day!

So it was a bit surprising to see Mayfield on Cowherd’s show today. And even more surprising was Mayfield breaking down video of himself running from the cops and being tackled by one during his infamous 2017 arrest.

Mayfield called the arrest a “rude awakening to responsibility and accountability” and said he had “so much regret.”

What wasn’t surprising, however, was Mayfield and Cowherd getting into it over whether or not Baker is a team player, and Mayfield taking a blowtorch to Cowherd’s hot takes.

Baker Mayfield roasted Cowherd for trying to make him seem like a “bad teammate” after a TD 🔥 pic.twitter.com/vdR2gZtf4M

When you know you’re about to body a fool pic.twitter.com/pGYwkc1SAM