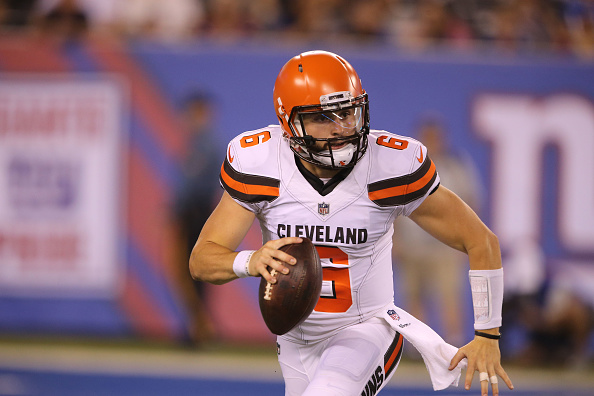 Despite looking pretty impressive in the preseason it doesn’t appear that Baker Mayfield is going to play much this season.

On Monday, Browns coach Hue Jackson made it clear that Mayfield was not going any snaps with the first team during the preseason.

On Monday, when reporters asked coach Hue Jackson if he’ll give Mayfield the chance to take some reps with the first-team offense during the preseason, Jackson emphatically shot down the notion.

“No, no, no, no, no,” Jackson said, per Cleveland.com. “Everybody’s asked me that a ton of times. Why? I’m going to tell you the reason why. We are learning a new system, and I think Tyrod needs every rep that he can get with the ones.

“I think Baker’s doing outstanding with the twos. If something happens and we need to put him there, we will. Right now, that hasn’t happened.”

While Mayfield is keeping the bench warm for Tyrod Taylor he’s making sure to maximize his money off the field.

Today, Mayfield released an absolutely ridiculous photoshoot in collaboration with PSD underwear that featured a tiger and a Rolls Royce.

Excited to announce my partnership with @PSDunderwear! Giving away 500 free pairs today. Tiger not included 😂. Give them a follow and shop my collection! https://t.co/Xy4RsMtas1 pic.twitter.com/6lt56PeWjw

Of course the Internet had jokes about Mayfield’s strange photoshoot.

Baker, love ya man but maybe slow your roll a tad. First you need to go dominate this next level like you did college football then you can sell all the underwear, tigers and cars you want. We're not gonna remember you for the underwear, just the wins. BOOMER!

Was this a Browns Rookie initiation tweet? If so I guess it is better than shaving your head or carrying shoulder pads around for the Vets! #GoBrowns

Come on Baker we don't need this in Cle we need wins!

I’m pulling for you Baker but… pic.twitter.com/BP4nKbFJBB

Put a shirt on or get some sun my guy. You matching the car right now

This is like the Ricky scene where he is doing stupid commercials! Cmon man