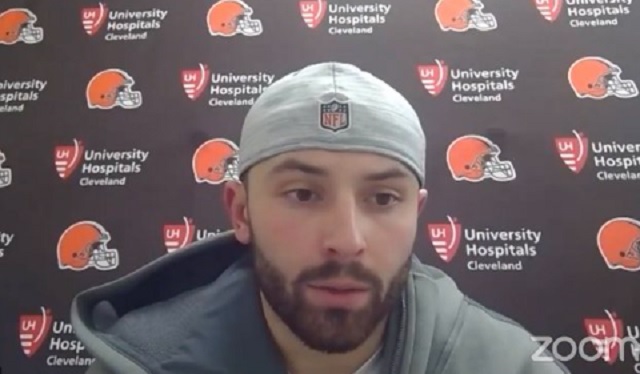 Baker Mayfield is still beefing with FS1 host Colin Cowherd after all these years.

On Friday, Cowherd went on a dumb rant on how he felt the Browns were going to lose because Mayfield wore his hat backwards during a press conference.

“I know, it’s no big deal, says the guy who wears the hat backwards. Look at that. That just says playoff loss, doesn’t it? Doesn’t that just say down 12, sack, fumble, minute-and-a-half to play. It doesn’t say playoff winner to me. It says things are unraveling in Pittsburgh this weekend.

“The last quarterback to wear a hat backwards at the weekly podium—one did it this year—Carson Wentz. Look at that. What happened to his season? You guys say it doesn’t matter. All right. It is hat on backwards karma. It is bad. [That’s] another reason I like the Steelers this weekend.”

The Browns went on to beat the Steelers on Sunday and Mayfield immediately trolled Cowherd by making sure to wear his hat backwards during his postgame press conference.

Tonight, Baker Mayfield paused before answering his first question in his postgame media Zoom to flip his hat around backwards. Petty AF and I love it. https://t.co/MTc42Giy70

Baker Mayfield entered his press conference with his hat forwards, then turns it around backwards. He’s a backwards hat kinda guy.

Baker Mayfield just made a point to turn his hat around backwards before his media availability pic.twitter.com/RKp2XeGDOn