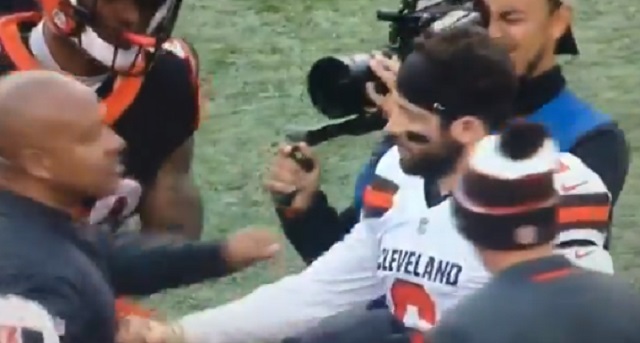 Baker Mayfield is no longer a Hue Jackson guy.

After today’s Bengals-Browns game, Mayfield appeared to give his former coach the cold shoulder during an awkward on-field exchange.

After the game, Mayfield confirmed that he wasn’t happy with Jackson joining the Bengals as a coach after getting fired from the Browns.

Opinions were mixed on whether Baker was in the right for calling out his former coach.

He was fired. He can go anywhere he wants if someone offers. Not like it was his choice to leave CLE as head coach and take a downgrade to CINN.

Out of respect to the team, most coaches would wait until the next season before accepting positions anywhere, let alone a rival.

I love Baker, but he's wrong. Hue was fired and did what he had to do for himself. I have no problem with Hue going to work for his best friend.

Baker is just being real. That is what he is about. The kid is the real deal, on the field and off of it. We are lucky to have him.