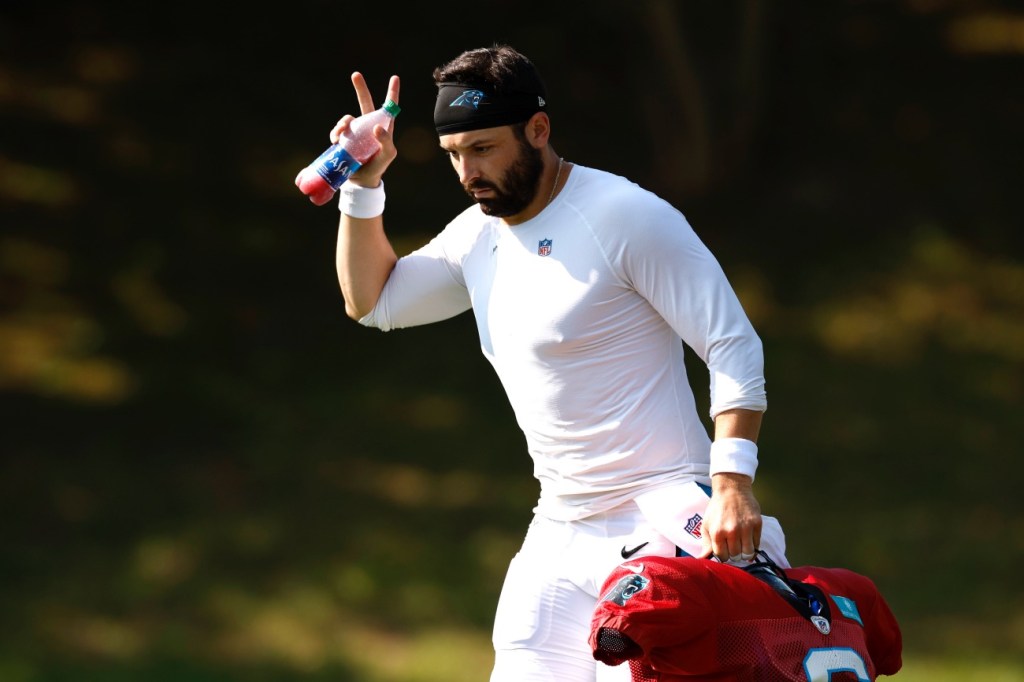 Carolina Panthers head coach Matt Rhule isn’t making any public proclamations on who will be the starting quarterback in Charlotte for quite some time. The Panthers play their first NFL Preseason game on Saturday against the Commanders followed by two more games before the start of the regular season and at this point, it has seemed like Baker Mayfield is the clear favorite to start but the organization is being intentionally noncommittal.

To be clear, things in the Panthers’ organization aren’t that vague. Baker Mayfield is #1 on Carolina’s depth chart followed by Sam Darnold, Matt Corral, and PJ Walker. But there has been speculation on whether the Panthers will go with Darnold or the Bake Show, and if they go with Baker would they trade away Darnold.

Baker’s comments so far at Camp indicate he’s saying and doing all of the right things (so far) and head coach Matt Rhule appears to be taking notice of that. Scott Fowler of The Charlotte Observer spoke with Baker and Rhule who had both interesting things to say…

On Monday’s quarterback competition, Baker said “it’s not about trying to stab one another in the back. It’s about elevating, because the franchise and the team go as the QB room goes.”

Rhule had this to say about Baker on Monday, “he’s definitely improving, as he gets more and more of a feel for what he can do at the line of scrimmage… What he’s done in 10 days (of training camp practice) is pretty impressive. He’s making really good jumps.”

Baker’s already getting a feel for his wide receivers and the team in just 10 days, according to other reports.

Here’s what others are saying about the Panthers camp (so far).

By all accounts, Baker Mayfield is comfortably leading the QB battle in Carolina, yet Matt Rhule says he won’t name a starter for a couple weeks. That could be their way of trying to drum up interest in a trade for Darnold. Matt Corral could and probably should be the #2 there.

If you, me, and everyone's mom knows Darnold isn't in this QB race, I don't think you're gonna trick sn NFL GM into thinking he is.

Who knows, maybe they moneyball it and trade him for 3 years of vending machines being stocked.

But even with all of this optimism, the over/under on the Panthers’ Wins Total is just 6.5 games this season. Baker holds a 30-30 record in his NFL career with only one season over .500 in 4 years. It will certainly be interesting to see if he can bottle some magic for the Panthers and as a Bucs fan it’ll be hard to root for Baker to succeed but I’d certainly like to see his career pan out after what happened in Cleveland.

The Panthers are really taking their time with their seemingly obvious quarterback decisionhttps://t.co/LItfbLqdMt