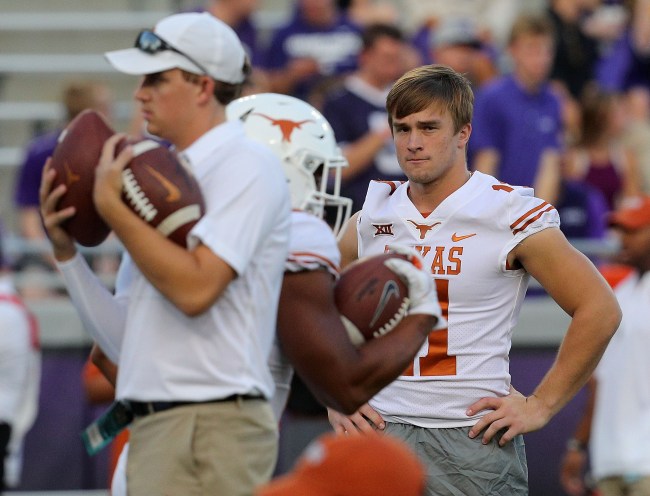 Oklahoma offensive tackle Orlando Brown’s draft stock has likely plummeted after a historically bad combine performance. The 6-foot-7, 345 pound Big 12 Offensive Lineman of the Year finished at the bottom of his group in the  40-yard dash (5.85) and the vertical jump (19.5 inches), posting numbers that many analysts believe will drop him out of the first round.

His bench press total (14 reps at 225 pounds) was the position-worst, and one of the fewest reps for offensive tackles with 35” inch + arms since 2003.

Hard work and @yjmcknight will buy you more than 14 reps at the Combine. I can promise you that! #HookEm 🤘🏻 https://t.co/m6b9NTxsxr

A flurry of Oklahoma players responded on Twitter to the promising freshman’s jab.

Everybody Worried About Reps, Watch The Tape and Count Your Wins.. 🤫

With those 14 reps he’ll still be a higher draft pick ⭕️🙌🏾 #OUDNA https://t.co/zPoUBu6iMP

When Baker Mayfield was asked about Ehlinger making fun of his former teammate, he was vintage Mayfield.

Baker is referring to Ehlinger’s failure to beat Lake Travis, Mayfield’s high school alma mater. And in this year’s Red River Rivalry, Texas came up short after Ehlinger’s comeback was stunted by an injury that sent him to the sidelines in the waning moments of the game. Oklahoma won 29-24.

Despite the Texas quarterback never hanging a win on Mayfield or Orlando Brown, he kept the beef going with the following tweet:

The Sooners and Longhorns square off again on October 6. Baker will be in the NFL.