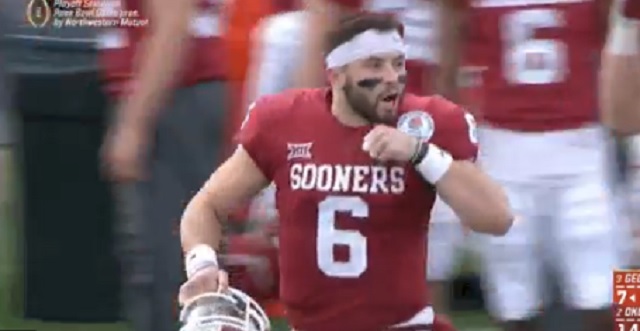 The NFL draft is months away but Oklahoma Sooners QB Baker Mayfield is already making headlines. Last night, Mayfield caused a bit of a stir when he went on Kenny Stills’ Instagram live feed and lobbied for the Miami Dolphins to draft him.

Kenny Stills is live on Instagram. And Baker Mayfield is letting people know where he wants to be drafted. #miami #dolphins pic.twitter.com/iyUvpXg5Yo

Mayfield went on to say that he wasn’t being serious about being drafted by the Dolphins and that he’s willing to play anywhere.

Just so everybody knows… I commented about playing for Miami because I was talking to a former Sooner in Kenny Stills. Everybody can relax, I will play anywhere that gives me a chance. I’m not picky, I will go anywhere and strive to uplift a franchise and win ball games.

Mayfield’s personality is good for entertainment purposes but are teams going to shy away from him because he’s the cockiest player to enter the league since Johnn Manziel? Let’s hope Mayfield is giving a chance to thrive in the NFL because it appears that he’s going to be very fun to follow.