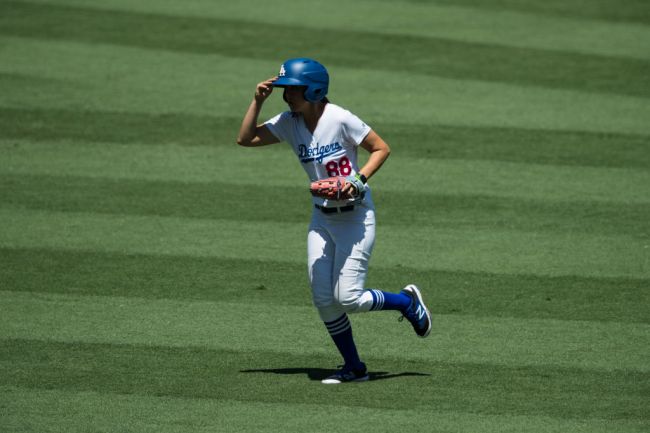 The Los Angeles Rams (and Chargers!) are gearing up for the 2021 season and they might want to look down the street for talent. A fan ran onto the field during Sunday night’s Dodgers game and the ball girl delivered a textbook tackle that would serve well at linebacker for either NFL franchise.

During the bottom of the sixth inning, with the home team ahead against their crosstown rivals, a fan emerged on the field from the outfield bleachers.

Initially, a group of three security guards converged on the rogue spectator. However, it quickly became clear that it would take more than a trio. Three other guards joined the pursuit, bringing the total up to six.

The fan looked like he was going to be caught right away, but he stutter-stepped one guard to create some space.

And then he out-ran another— high-stepping away from a diving tackle attempt.

As he cut back to try and split the guards, another one of his pursuers also laid out. In an act of incredible athleticism, the fan hurdled over the effort and breaks loose toward the stands. He threw up his left arm in celebration.

He had all kinds of daylight and only the punter (the ball girl, in this case) to beat.

With the fan quickly approaching, the ball girl broke down into a ready position and shuffled along the wall. She set up with her shoulders square and laid the fan out, flipping him over the wall.

The crowd went bonkers throughout the entire pursuit and gave the ball girl an incredible reception upon making the textbook tackle. Here is the full video:

Other angles of the chase show just how impressive final tackle was.

either this guy needs to be a running back or dodgers need faster security lmaoo, ball girl is mvp tho pic.twitter.com/x4yRcbOXyi

As football season quickly approaches, one of the 32 teams in the NFL need to get this girl on a roster. And honestly, the fan might not be a bad kick returner either. Sign them both!