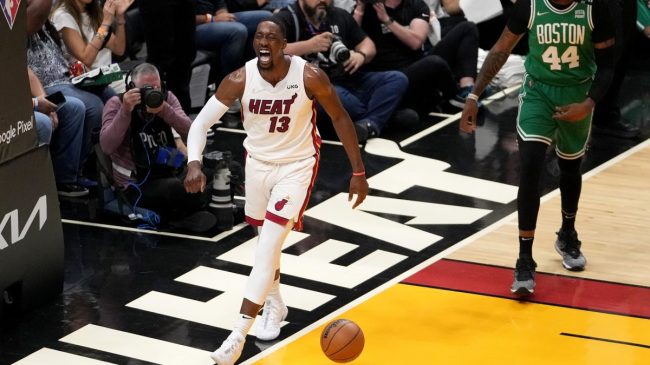 The Heat’s season is officially over.

On Sunday, Miami was defeated 100-96 by the Boston Celtics in Game 7 of the Eastern Conference Finals. After winning the uber competitive series, the Celts will move on to face Golden State for a chance to bring home an NBA title.

While Boston players are celebrating, Miami was left frustrated after coming up one game short of a championship appearance. The Heat battled through injury and adversity but after a valiant effort, the 2021-22 campaign is done.

That frustration boiled over into the locker room for Heat players. One superstar, in particular, was seen ripping off his jersey shortly following the loss.

Not enough people are talking about Bam Adebayo ripping off his jersey like it had buttons pic.twitter.com/B9rZjePgJo

Adebayo, who posted a double-double on Sunday night, tore through his No. 13 jersey with ease after the defeat. He’d done just about all he could to help push his team past Boston in Game 7, finishing with a 25-point, 11-rebound performance, but it wasn’t enough.

The emotion of the series loss finally got to him, and the feat showed some impressive strength on Adebayo’s part. I mean, he made it look like the shirt had buttons on the front, tearing his top with what looked like little effort.

It had people impressed.

Bam ripped his jersey at the end of Game 7 😱 pic.twitter.com/jpce0AYKpK

Of course, this couldn’t be complete without a few Hulk Hogan references.

Bam Adebayo ripped his Heat jersey like Hulk Hogan in the 80’s! pic.twitter.com/A6lvwBq3JV

Others were just in awe of how easily the jersey came off.

Bam adebayo took the Jersey off like a blouse

Bam Adebayo literally ripped his jersey off in the tunnel lol

The Heat will head back home until next season. They’ll hope to make it just a little further in the postseason next time around.