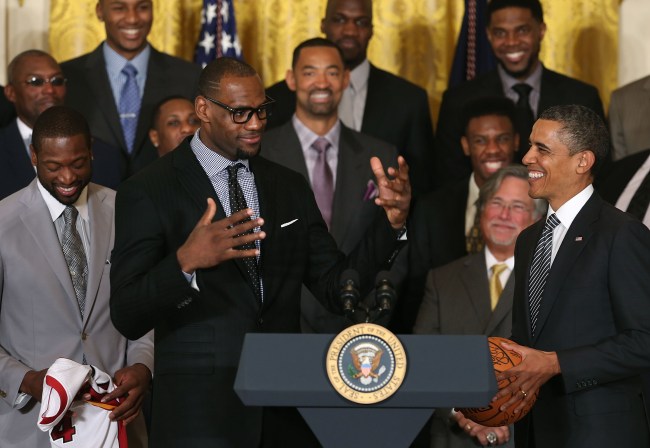 The NBA playoffs are set to resume on Saturday after a brief strike among players following the police shooting of Jacob Blake and it seems like President Barack Obama played a big part in helping players come together.

On Wednesday night it was reported that the NBA season was in jeopardy after a meeting among players become contentious and ended with LeBron James storming out.

The next day, LeBron and a small contingent of players spoke with President Obama on the phone and he advised them to continue playing.

LeBron James led small group of players who sought advice of Barack Obama on Wednesday, and the former President offered them guidance to continue playing with plan of action.

Former President Barack Obama spoke to James, National Basketball Players Association president Chris Paul and a small group of players late Wednesday evening, advising them to play and utilize the opportunity to contextualize action they want in order to play, The Athletic has learned.

James, Paul and others wanted to seek the guidance of the 44th President of the United States (2009-2017), and on the call broached forming a committee for player action that they want Obama involved in, sources told The Athletic.

The players then spoke with owners and were able to come to an agreement that the NBA would help expand the league’s voting initiative for the upcoming Presidential election.

Sources say Lebron James was the last player to speak on the call and he delivered a strong, thoughtful message to the owners. His main point was that the work has to continue, and the owners have to truly dedicate to advancing this cause.

Joint statement from NBA and player’s union says NBA playoff games will resume tomorrow, with the league agreeing to the steps detailed below to expand voting access and players’ social justice efforts pic.twitter.com/bOnz6U2MNq