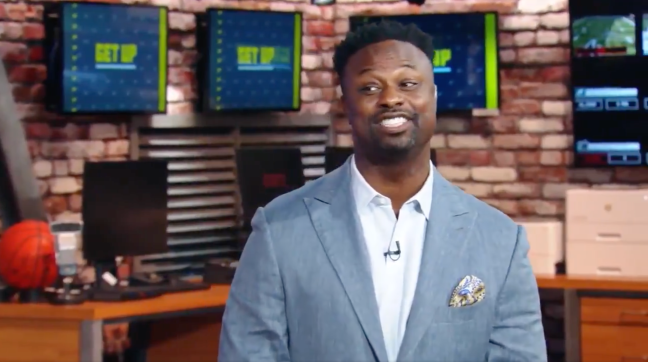 Get Up! on ESPN

Bart Scott has absolutely zero confidence in the Philadelphia Eagles.

As the Birds gear up to host the San Francisco 49ers on Sunday, the former NFL linebacker turned analyst is putting his eyebrow on the line. During Thursday morning’s edition of ‘Get Up!’ on ESPN, Scott taunted Eagles fans for getting their hopes up only to be let down.

After Philadelphia’s 32-6 win over Atlanta in Week 1, jersey sales in the City of Brotherly Love skyrocketed by 500%. Eagles fans are all-in on their team in 2021.

However, Scott believes that first-year head coach Nick Sirianni’s team is a bunch of pretenders. He predicted that Philly is going to have a much more difficult time against the 49ers this weekend.

Scott’s ESPN colleague Damien Woody strongly disagreed with the prediction of a humbling loss for the Eagles. The disagreement led to a debate between the two and at the end of said debate, Scott said that he will shave off one of his eyebrows if Philadelphia wins on Sunday.

"If the 49ers lose to the Philadelphia Eagles, I'll shave my eyebrow off."

The 49ers should have blown out the Detroit Lions in Week 1, but instead, San Francisco almost blew the game. Scott doesn’t think that the near-loss will have any affect on their game against Philly.

According to ESPN’s Football Power Index, which doesn’t really mean anything, the 49ers have a 52.8% chance of winning. Scott is clearly confident in that 2.8%, because he certainly would look ridiculous with only a singular eyebrow.

Regardless of your allegiance this weekend, unless you’re from Philly, I think we’re all rooting for the 49ers to take down Scott’s brow because it would be hilarious.