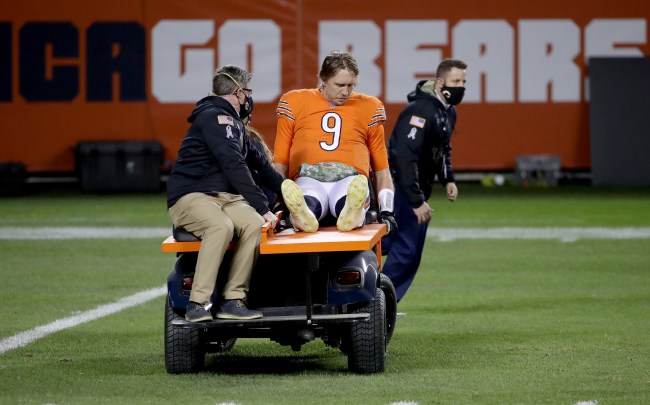 On Monday night, Foles was carted off the field after landing awkwardly in his game against the Minnesota Vikings.

Here's the play, with 34 seconds left in the game: Nick Foles gets slammed to the ground and had to be carted off. pic.twitter.com/1WLHoTAP4A

While it initially looked like a serious injury, Foles only suffered a hip and glue injury and was day-to-day to play.

Bears’ HC Matt Nagy said Nick Foles’ hip and glute injury “isn't as bad as we once thought. Bears are on a bye and Foles will be day to day.

Scott went on the Keyshaw, JWill & Zubin show on ESPN Radio on Wednesday morning and blasted Foles for crying and being overly dramatic over a hip pointer/bone bruise.

“Oh, we’re supposed to have empathy?” “The man looked like he was crying. There’s no crying in football! And if there’s crying, something better be broken and need to be amputated.”

He got a bruise,” Bart Scott said. “The man looked like he was crying. You know who Nick Foles is, he is that dude screaming I’m drowning I’m drowning and somebody says hey stand up. Oh, all I had to do was stand up. He got a boo-boo.”