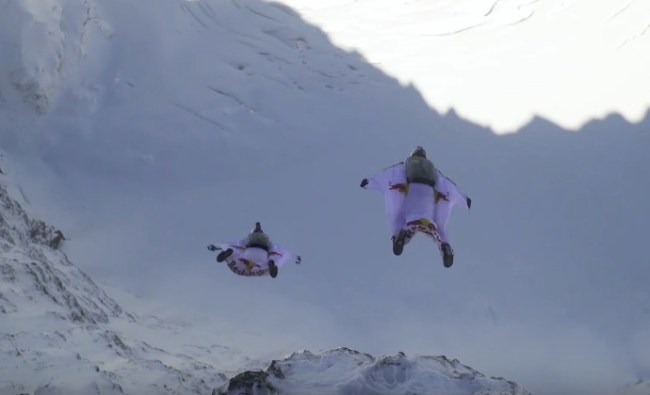 The Wide World of Extreme Sports is too crazy for most people on its tamest day. This? This is something that even the craziest of Extreme Sports athletes wouldn’t attempt if there was a six-figure payday on the line. But here we are, with some of the most insane footage you’re ever going to see.

Fred Fugen and Vince Reffet are known as the ‘Soul Flyers’ in the B.A.S.E. Jumping community and they’ve just cemented their legacy as some of the greatest in the sport’s history. On a recent jump (filmed by Redbull) they took off from Jungfrau mountain in the Swiss Alps and landed inside of an airplane. Soak that in. They took off from a mountain and landed inside of a moving plane. Absolute insanity:

The concept behind this genuinely sounds like something that you could only come up with if you were stone. ‘Bruh, we should jump from the ground and land in the sky’. According to the video’s description on YouTube, this jump took a ton of preparation:

As part of their project A Door in the Sky, which they had spent several months training for by completing more than 100 test flights in Empuriabrava in Spain, the duo B.A.S.E jumped from the top of the Jungfrau, one of Europe’s highest mountains, and flew into a Pilatus Porter light aircraft in mid-air. Now that’s a different way to catch a flight.

I still cannot fathom how someone reasonably came up with the idea for this jump and pitched it to Redbull without someone stopping them and asking ‘are you out of your damn mind?!’ This is, without question, one of the craziest stunts in Extreme Sports history.