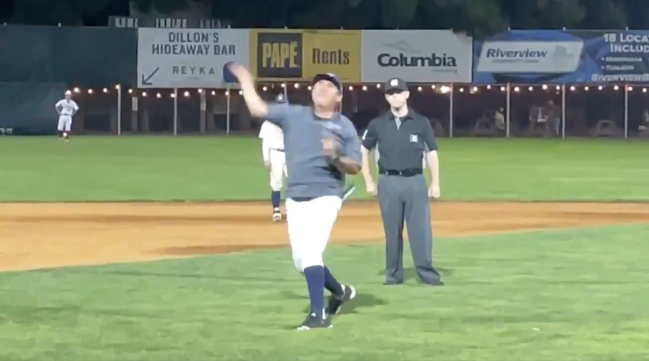 Portland Pickles manager Mark Magdaleno does not get ejected. He ejects you!

The first-year coach was arguing with an umpire on Thursday evening when he was firmly tossed from the game. Instead of kicking dirt or getting up in the ump’s face, Magdaleno decided that he was going to return the favor.

He marched onto the diamond and proceeded to throw out the manager in epic fashion. Not once, but twice.

Amid his rage-filled tirade, Magdaleno lost his gum before storming off of the field. It was a glorious performance that was different from most manager tirades.

umpire gets thrown out twice pic.twitter.com/5KpnoZ8mQn

I love everything about this. He didn’t go over the top, he didn’t cause a stoppage of play, Magdaleno got his money’s worth and let it lie.

YOU GET OUT OF HERE, BLUE!

To make things even better, his team got the last laugh.

Relive last nights MAGIC with a walkoff win for the second time in three nights! (From the SAME guy!!) @leo_mosby #picksarehot 🔥 pic.twitter.com/TLjBwanaKO

The Portland Pickles are a collegiate woodbat baseball team. They play in the West Coast League, which is considered a premier collegiate summer league, similar to the one in Cape Cod.

However, the Pickles play in the Pacific Northwest and British Columbia— which is hard to beat.

As for Magdaleno, he is amid his 38th season as a skipper. He has coached five decades at the high school and collegiate levels.

Tapped as the manager for Portland in the summers, he serves as the head coach for Clark College in Washington. He needs six more wins to become the third winningest coach at the school.

Needless to say, he has learned a thing or two about arguing with umpires over the past 38 years.