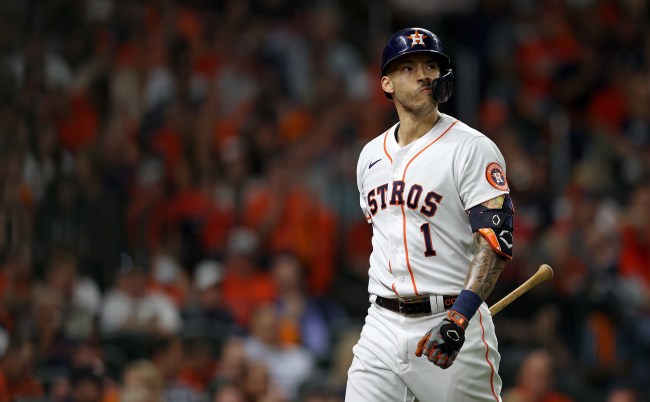 Noted cheater and former Houston Astro Carlos Correa took an interview with “Me Gustan Los Deportes” as an opportunity to question the validity of some of Derek Jeter’s accomplishments.

In the interview, Correa decided that the Gold Glove he recently won, his first, qualified him to claim that Jeter didn’t deserve any of the 5 Gold Gloves he won during his storied career with the Yankees. He then went on to defend his stance by citing Jeter’s career defensive runs saved numbers.

It was a bold strategy from Correa, an already unlikeable character thanks to his presence on the infamous Astros garbage can team, during an offseason where he has hit the free agent market. Statements like this certainly won’t win him any favor with fans, especially fans of the shortstop-needy Yankees.

However, this might not be a deal-breaker for the Yankees as manager Aaron Boone had some positive things to say about Correa today.

“He’s a guy that has really developed into a leader over these last several seasons with the Astros.” pic.twitter.com/OeYR5CQOvT

Twitter is unsurprisingly not coming to his defense on these comments with many taking the opportunity to remind the world of Correa’s cheating past.

No one cares about you or your trash ass opinion @TeamCJCorrea you didn’t deserve that World Series ring you garbage can https://t.co/DCeU9Oh3S9

The best part of this whole episode is that he may not even be wrong. There are many out there who also believe that Jeter’s defense is overrated and there are numbers out there to back that idea up. In reality, the issue that most people have with it is that it came from a member of that Astros team.