Astros’ Stars Jose Altuve And Carlos Correa Are Total Cowards For Skipping MLB All-Star Game, Make No Mistake About It 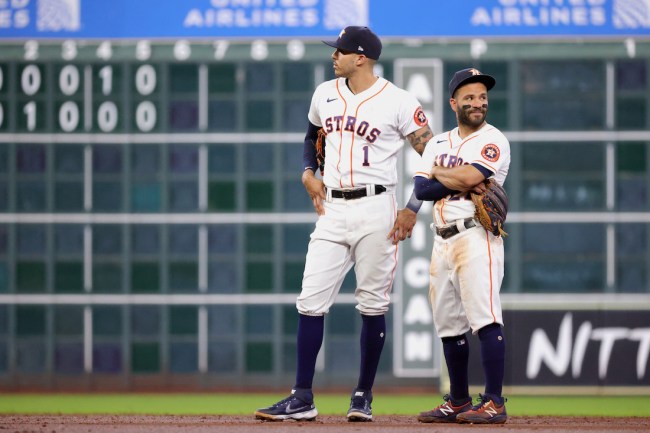 Houston Astros’ stars Jose Altuve and Carlos Correa have endured a helluva lot over the past couple years. That’s what happens after it was discovered that they, along with teammates, cheated their way to a World Series title a few years back, triggering MLB fans and other players in a way like we’ve never seen before.

Fair or not, both of their respective legacies will forever be associated with cheating — and deservingly so.

But here’s the thing: Both Jose Altuve and Carlos Correa need to take responsibility for their actions and embrace the fact that it happened, they’re both disliked and just go about their own business. That clearly hasn’t happened.

Instead, both players pulled out of the MLB All-Star Game instead, offering up some BS excuses as to why they won’t be participating in the Midsummer Classic this season. Take a look at what both claimed were their reasons.

Carlos Correa on why he’s skipping the All-Star Game pic.twitter.com/X2leKxoGJg

Jose Altuve on choosing not to play in the All-Star Game: “I really want to thank everybody that voted for me, that believe in me. I really need these four days. I’m putting my team first because I really think we have a chance to win this year.” pic.twitter.com/eJlZNT012Z

Oh, so this is the year that both Altuve and Correa feel like playing in the MLB All-Star Game isn’t worth it, huh? That this season their Houston Astros have a legit chance of winning it all and that playing a couple innings in July could ruin that? Funny how that works.

Lest we forget that this is the first All-Star Game since the Astros’ cheating scandal became widely-known. That means it’s the first time fans will be packed in a stadium to root for their favorite players who many of them voted for to be there. The excuses from both Jose Altuve and Carlos Correa seem like they didn’t want to be the black sheep of the bunch as the only ones getting booed.

According to Dictionary.com, the definition of a coward is the following: A person who lacks courage in facing danger, difficulty, opposition, pain, etc.; a timid or easily intimidated person. It sure seems to fit the description of both Houston Astros’ stars here, doesn’t it?

Look, as a baseball fan, I could care less whether or not either Altuve or Correa participate in the MLB All-Star Game events. Both were voted in, so both earned their way there this season.

But continuing to lie about why they won’t be playing only confirms that these guys are cowards who don’t know how to tell the truth. Just like the way the helped the Astros cheat to win a World Series, the two players continue to do more harm in trying to repair their reputations and earn the trust of fans.

Instead of facing the criticism and the boos head on, the two come across as puppies crying in the corner with their tails between their legs. And until that changes, both Jose Altuve and Carlos Correa will continue to be hated by fans.