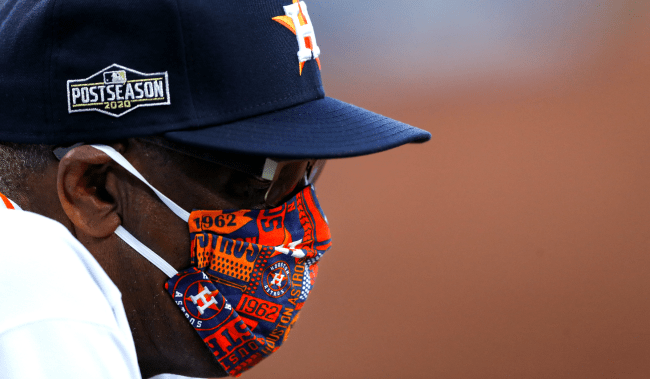 “I think we have quite a few All-Stars here. I think some of them might not have gotten the necessary votes because of we’re on the Astros,” said Baker, according to Fox 26 Houston’s Mark Berman. It’s good when you’re at home right before the All-Star break because the people tend to vote a whole lot when you’re at home.”

I wish that were true, but unfortunately, it’s probably not, due to safeguards built into the MLB All-Star Game voting system which prevents fans from doing something like making Francisco Lindor the National League’s starting shortstop this year.

Related: Dusty Baker Says Fans Heckling The Astros Are Hypocrites Who Have Surely Cheated On A Test Before

With MLB’s new All-Star voting system, the choices for each position in each league have already been winnowed down to three players (six for outfielders).

So while it’s unlikely, it is possible for the Astros to have the entire starting infield for the American League, plus the catcher and an outfielder, when the 2021 All-Star rosters are named on Sunday, July 4.

Baker told MLB.com this week that he hopes most of them make the team, plus a few of the Astros’ pitchers as well.

Dusty Baker: “I’m seeing the (Ryan) Pressly now that I heard about before.I’m glad that we tried to take him out of that multi-inning role b/c he’s much more effective to help us on a daily basis.He’s one of the guys I voted for to make the All-Star Team.He’s certainly deserving”

“We got four or five people I think are deserving — Altuve, Brantley, Yuli, Alvarez, Correa,” said Dusty Baker. “Also, I think [Zack] Greinke. [Luis] Garcia’s in consideration. [José] Urquidy’s in consideration. Hopefully we have a lot and hopefully they take it as an honor and want to go. You also realize that some of the guys could probably use a break, too.”

Cast your vote for the 2021 MLB All-Star teams over at MLB.com and, please, do vote with your conscience.

Related: The Houston Astros Are Apparently Crying To The MLB About Fans Taunting Them In Stadiums