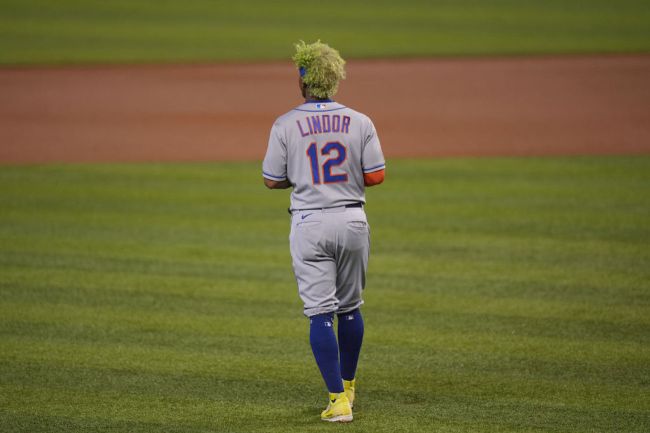 For New York Mets fans, 2021 was supposed to be the year. Perhaps not the year they won the World Series, but the year they shed the shackles of being the Same Old Mets. After all, when one of the richest men in America, Steve Cohen, purchases the team, how else were they supposed to feel? “Finally,” Mets fans thought, “We have a wallet that matches our market.”

Alas, because time is nothing but a flat circle, the Mets remained mired in mediocrity. Not only has the offense yet to *truly* show up this year, and not only is the team’s starting lineup ravaged by injuries, but the club’s brand new star player — the $340 million, big-ticket offseason acquisition Francisco Lindor — has been woefully underperforming thus far, as he’s batting .189 with just seven — SEVEN — extra-base hits after 41 games.

Mets fans, certainly never known for their patience, have already begun turning on Lindor, particularly following his ninth-inning at-bat against the Rockies on Monday night, which saw him fly out to left field with the Mets trailing by just one run, capping an 0-4 night at the plate.

RELATED: The Childlike Enthusiasm Of Mets Pitcher Tommy Hunter Following First MLB Hit Is Why Sports Are The Best

Francisco Lindor showing again what a great teammate he is by purposely grounding into a double play so James McCann didn't have to.

This trade makes absolutely no sense so far LOL pic.twitter.com/YHYrS5fAEe

Lindor is all of us waiting for Lindor to start playing like Lindor. https://t.co/Lo0uVnBJN9

Lindor is batting .189 and it's almost June.

Yeah, it's well past time to be concerned.

This is the time the #Mets need Francisco Lindor to step up. Instead, he just isn’t getting it done at all.

Unfortunately — or luckily, depending on how full and/or empty your glass is — for Mets fans, the 27-year-old Lindor is just two months into his 10-year, $340 million deal, therefore giving him plenty of time to turn it around… or plenty of time to make things worse.

Still, after all the hype surrounding his move to the Big Apple, it’s understandable that Mets fans are frustrated with their new All-Star shortstop performing like a minor league player for the first quarter of the season.

The New York Mets, who are *somehow* still in first place in the NL East despite their remarkably average start to the season, take to the diamond tonight against the Colorado Rockies with ace pitcher Jacob deGrom back on the hill following a short stint on the injured list due to back tightness.