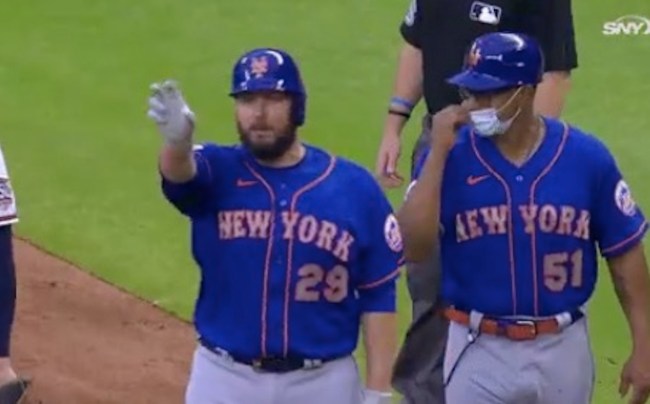 Hell of a week for the personalities of the New York Mets.

Earlier today, co-worker Matt you brought the awesome story of Kevin Pillar, who showed nothing but class as he empathized with Jacob Webb, the Atlanta Braves pitcher who obliterated Pillar’s face with an errant pitch on Monday night.

“I know how tough that can be on someone who feels responsible for someone getting injured… He needs to continue to be confident and believe in himself,” Pillar told the media.

The mangled New York Mets outfielder wasn’t the only member of the team to have a portion of his press conference go viral, though, as this clip of Tommy Hunter reveling in the childlike enthusiasm of getting his first Major League Baseball hit is simply why sports are just the best: they can turn grown men into grinning kids. What makes Hunter’s first hit even more amazing it that it came in his 476th game at age 34-years-old.

"I jumped on first like a little leaguer…I got a knock in the show!" pic.twitter.com/WBN5gNnq5x

“Walking into the box, and I’m like, ‘My heart is beating so fast,’” Hunter said. “It was. I was nervous. And then I got a hit in the big leagues. I’m telling you, man, it’s the coolest thing I’ve ever done. My wife sent me a video. My son was watching it. I mean, I don’t know. That’s definitely a highlight for me.”

The New York Mets will be looking to sweep their NL East rivals when they play the rubber match against the Braves tonight in Atlanta at 7:20 p.m. EST. David Peterson is on the hill for the Mets, while Charlie Morton gets the nod for the Braves.