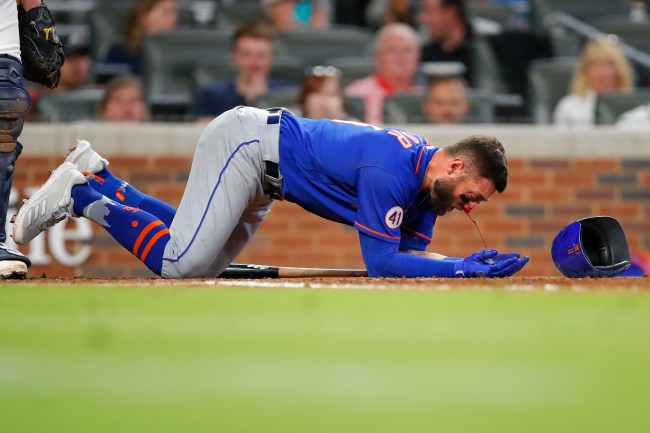 I may be in the minority on this, but if a man is throwing a 94.5 mph fastball at my melon, regardless of intent, he’s going to be driving on some slashed tires.

Kevin Pillar is a better man than I, showing empathy for Jacob Webb after the Braves pitcher drilled him in the face with an errant fastball that shattered multiple nasal bones and will cost Pillar at least a month on the IR.

Kevin Pillar got hit in the face by a Jacob Webb fastball.

Amazingly, he walked off under his own power.

Webb was visibly shaken by the incident, trying to shake the tears from his eyes as Braves coaches spent several minutes trying to comfort him. Webb texted Pillar on Monday night to check on him and let him know the “the ball kind of just got away from me.”

Braves coaches Kevin Seitzer and Rick Kranitz have spent the past half-inning on the dugout bench talking with Jacob Webb ⤵️ pic.twitter.com/btCcycS4iI

Despite being “heartbroken” that he can’t help his Mets, who recently dropped three straight to the Rays, the 32-year-old Pillar put on an admirable face to the media and publicly showed support of Webb

“I know how tough that can be on someone who feels responsible for someone getting injured… He needs to continue to be confident and believe in himself.” -Kevin Pillar on Jacob Webb hitting him in the face pic.twitter.com/SgS2fGDdaN

“I’m almost more worried about him than I am myself because I know I saw his reaction and I know how tough that can be on someone who feels responsible for someone getting injured,” Pillar said.

Whether it be on the internet or in front of the media, there isn’t a lot of forgiving going on nowadays. To hear Pillar outwardly express his worry for Webb was a refreshing shakeup from Pitchfork Culture. Grace, we need more of it.