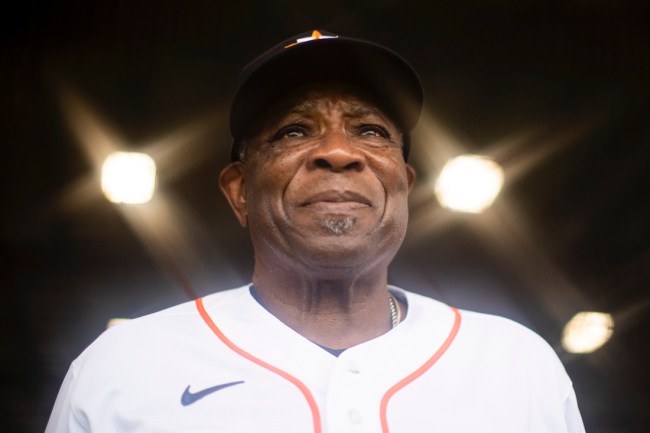 I’ve got the utmost respect for Dusty Baker, who has been named Manager of the Year three times in his illustrious career, while also guiding five different teams to the postseason, so the 71-year-old clearly knows what he’s doing when it comes to baseball decisions. Problem is, Baker can be a bit of a loose cannon, and has run into trouble by saying some questionable things over the years. Remember, this is the same guy who once cherished being the villain.

Somewhere along the way, though, Dusty Baker seems to have grown sick and tired of being a hated person, with his comments following his Houston Astros’ loss to the Los Angeles Angels proving that.

After fans at the ballpark were seen throwing inflatable garbage cans onto the field from the stands at Astros’ players, Baker (rightfully) condoned that type of abuse towards his players — which stems from the Astros cheating scandal a couple years ago. But in doing so, he’s opened himself up to a ton of criticism for why he thinks fans need to stop heckling his players, saying the fans doing so are basically hypocrites who have probably cheated at some point in life.

“I think that sometimes we need to look at ourselves before you spew hate on somebody else. It’s a sad situation for America, to me, when you hear things – I mean what are the kids supposed to think in the stands? And some of them are kids that are following their parents. It’s sad to me. People make mistakes. We paid for ours, and I wish they’d leave it alone.”

Now this is classic Dusty Baker, man. Sure, I’ll go ahead and guarantee every single fan in the stadium during the Houston Astros-L.A. Angels game on Monday have done something bad. They’ve lied. They’ve cheated. They’ve probably stolen, too. But for Dusty to compare those (presumably small) acts to the Astros cheating to win a World Series is ludicrous. In fact, it’s insulting, because they’re not at all on the same level.

Dusty Baker sounds like a petulant teenager who’s pointing fingers at other people, coming across as the victim. It’s pathetic, especially because Houston didn’t exactly pay the price for cheating. Sure, the former manager (A.J. Hinch) and the team’s former GM were fired, but the players are still technically *World Series champs in the record books.

Fans deserve to boo the cheating Astros as much as humanly possible all season long because they disrespected the sport of baseball. Throwing inflatable trash cans might be a bit much, but the hostility and hatred in the stands that Dusty mentioned above are rightful responses to the decisions of his players — even if he wasn’t around when it all happened.