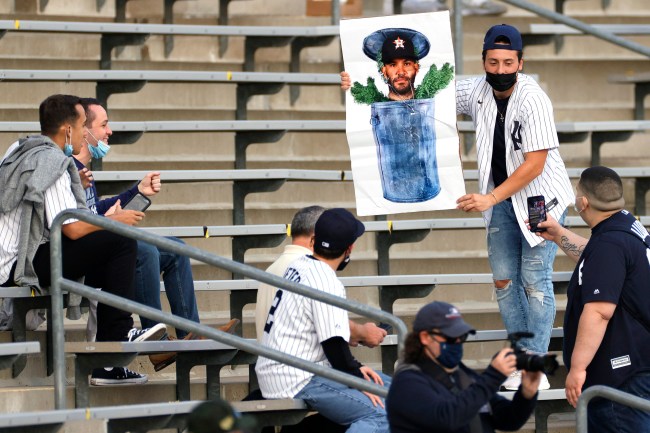 The Houston Astros don’t seem happy about the fact that rowdy fans are bringing props to mock them whenever they visit away stadiums.

All season long the Astros have been taunted by fans with signs and trash cans after many have labeled them cheaters when the MLB found the team banged on trash cans to alert hitters to what pitches were coming during their 2017 World Series run.

We’ve got LITERAL TRASH CANS being banged as the Astros are hitting! 😂🗑pic.twitter.com/VrD98t3mEQ

According to a report by Sports Illustrated’s Stephanie Apstein, a Yankees fan was asked to remove his trashcan outfit at the stadium before Tuesday’s game after security told him the Astros had complained about fans in other cities and the MLB instructed the Yankees to tighten their in-stadium rules.

This is so weak. And will only increase the animosity. According to @stephapstein, the Astros have complained to MLB about fans taunting them. https://t.co/bxUfLayLh0

Taub was delighted at the thought that he could welcome them to town encased in his own trash can.

When he arrived wearing the costume and carrying a sign reading YOU AIN’T STEALING THIS COSTUME TRASHTROS, he drew laughs and cameras. Unfortunately, he also drew attention from security. “Our policy changed,” he said the guard told him. Taub said the guard added that the Astros had complained to MLB about fans in other cities, and MLB had told the Yankees to tighten their rules. (The Astros, the Yankees and MLB did not immediately return a request for comment.)

Some fans were able to sneak in trash cans smaller than Taub’s. Ryan Donohue happened to own a foot-tall plush Oscar the Grouch; he taped on an Astros logo and added a mask inscribed BANG! Chico Heano wore a small plastic trash can around his neck and occasionally smacked it with a pencil shaped like a baseball bat. And two people in section 203 smuggled in inflatable trash cans, which they blew up in their seats and quickly had confiscated. (The Bleacher Creatures briefly batted one around like a beach ball.

The first casualty of the Yankees-Astros game: an inflatable trash can confiscated by security pic.twitter.com/Ip6fK6xVYz

Despite the heightened security, the 10,000 Yankees fans in attendance were able to make their presence known and trolled the hell out of the Astros all night long.