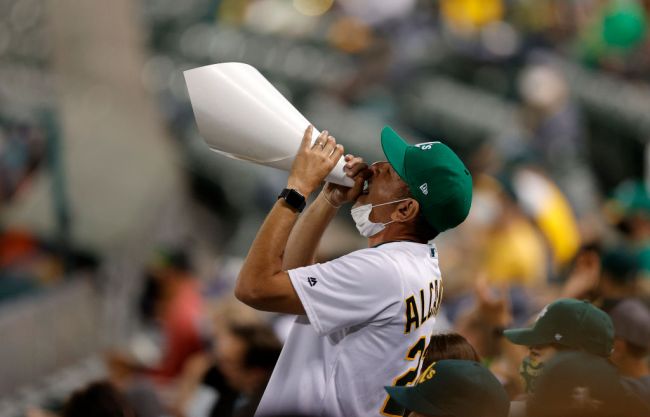 Boooooooooooooooooooooooo. Okay, now that we’ve got that out of the way, we can talk about how the Astros were ruthlessly booed by Athletics fans in their first game with fans in the stands since their punishment was dolled out for a cheating scandal in 2017. Houston traveled out to Oakland for 2021 Opening Day on Thursday and was met by a very rowdy, unexpectedly loud 26-percent capacity crowd at the Coliseum.

A's fans booed the Astros during pre-game intros and are holding up signs with trash cans on them. pic.twitter.com/0nYEcygXKP

He brought a full trash bin for the Astros!#OpeningDay #Athletics #RiseAndGrind pic.twitter.com/0LfQsQ3PA2

At one point in the fourth inning, fans lost their minds when Chris Bassitt run one up and in on Carlos Correa.

Safe to say the fans loved seeing Correa get hit by the pitch 🙃 pic.twitter.com/uNbkWfGt1N

A investigation into the organization for sign stealing resulted in the firing of manager A.J. Hinch and General Manager Jeff Lunhow, in early 2020. In addition, the franchise was fined $5 million and was forced to forfeit several top draft picks for the scheme. Beyond Texas, Boston Red Sox manager was implicated from his time as the Astros’ bench coach in 2017 and newly-hired Carlos Beltran resigned from his position as manager of the Mets before he even managed a game. He was an outfielder on the team during the 2017 season.

While Beltran was punished for being a part of the World Championship run, his other teammates who are currently active, were not. AND their ring was not revoked by the league. Commissioner Rob Manfred chose not to strip Houston of its 2017 title, which was won in seven games against the Los Angeles Dodgers, who won during last year’s unusual COVID-19 season.

His logic makes sense to some extent. There has been cheating in the game of baseball since the beginning of the game. Pine tar, steroids, corked bats, etc. This comes on top of gambling and fixed games. If we were to erase the game’s history, we would have to erase Barry Bonds, Shoeless Joe, Roger Clemons, and the rest.

“Once you go down that road of changing what happens on the field, I just don’t know how you decide where you stop,” Manfred said.

It sounds like relatively sound logic until you think about it this way— the league is contradicting itself. Manfred is saying that he doesn’t want to erase history out of left side of its mouth, but keeping the previous “cheaters” out of the Hall of Fame and record books with his right. That also doesn’t mean that the players shouldn’t be punished like the coaches. Why didn’t the Astros who were implicated have to serve a suspension when Beltran did?

To sum up the scandal in the shortest form: a secret camera would be placed in center field for home games. It would film the opposing catcher’s signal for what pitch to throw. The video was deciphered behind the scenes and given to a Houston coach, who would then relay what pitch was coming to his batter— either a fast ball, or a breaking ball/off-speed. That way, the hitter could know whether to expect the heat or sit and wait on the pitch.

Pitches were communicated through the banging of a trash can, where one bang means a fastball and two bangs means anything else.

Some batters also allegedly (eye roll) wore buzzers that would let them know at the plate. José Altuve was one of those involved, and was caught almost explicitly stating that his teammates should not rip off his shirt in celebration after a walk-off win because he had a buzzer on.

You'll be seeing this a lot.

Jose Altuve signaling to his teammates NOT to rip off his jersey in celebration because it would "allegedly" reveal a buzzer that would go off when triggered by someone on the Astros video team.

Here is a reminder of the primary suspects that we are to boo the most:

George Springer is showered in boos as he steps to the plate, tries to hit a ball far to silence the crowd and falls to a knee pic.twitter.com/HhRXIBOGyj

The Astros Shame Tour got off to a 1-0 start, and the bats of Bregman, Yordan Álvarez and Michael Brantly got it done. Bregman got his first taste of what could be a big “F**k You Tour” for him if he can return to form after a poor season last year, and Brantley joined him with back-to-back home runs.

For the third straight year, Michael Brantley has hit an #OpeningDay homer. pic.twitter.com/iqvAxBj2PP

Houston took a 5-1 lead late in the game and went on to close the door 8-1, but the beatdown didn’t stop Athletics fans from sticking around for all nine innings and getting their money’s worth. They were full-voiced in telling the Astros how much they dislike them from start-to-finish and the cheaters will run into this everywhere they go all season. Let ’em have it.