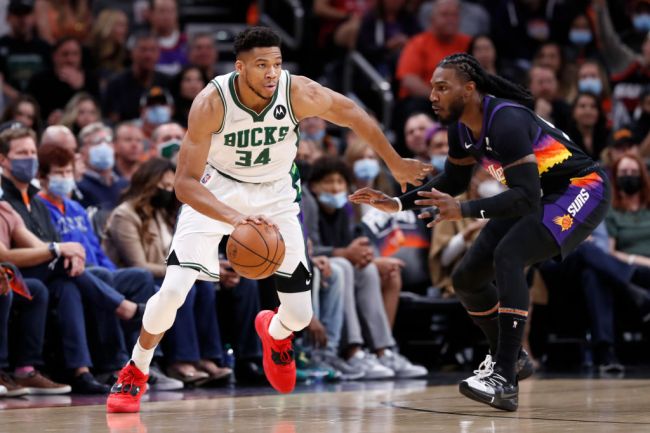 Giannis Antetokounmpo is in the midst of another dominant NBA season. The 2-time MVP and reigning NBA champion is once again in the MVP conversation, but that hasn’t stopped the hot takes from rolling in about his skill set.

“If you can’t shoot, it’s gonna be hard. And Giannis’ game is predicated on coming downhill. … It would have been tough for him to be who he is today, back then.” https://t.co/RCaMfyd5eu

Basketball fans have been roasting McGrady on Twitter ever since his quote about Giannis surfaced.

Tmac funny as hell cause he struggled in his own era😂

TMac gotta stop talking like he could get out the first round https://t.co/DKgaAoTvJN pic.twitter.com/Bk9O55wYLY

Giannis 7 foot and like 250 and the most athletic player in the world..He would have those “traditional” 4’s and 5’s in TMac era ready to find a new career path.

Let me get this straight. These old heads make fun of players for always wanting to shoot threes and not being physical. But when there’s a guy who fits exactly what they want and mainly goes for attacking the rim and plays physical then they make fun of him???!

The fact that its a shooter's era and #Giannis still won the MVP TWICE without a reliable jumpshot, proves that #TMac has no clue here.

It's literally the opposite of what he's claiming. 🤦‍♂️

Old heads out of control🤦‍♂️😵‍💫

TMac played in an era where Eric Snow and Tyrone Hill started for an NBA finals team so idk wtf is going on here. https://t.co/Ajw6MhUYed

It’s really a ridiculous take. Giannis Antetokounmpo currently plays in an era that is built around volume shooting and he dominates. In Tracy McGrady’s era he’d have been an absolute force. Giannis certainly would have at least been able to lead his team’s out of the first round of the playoffs.