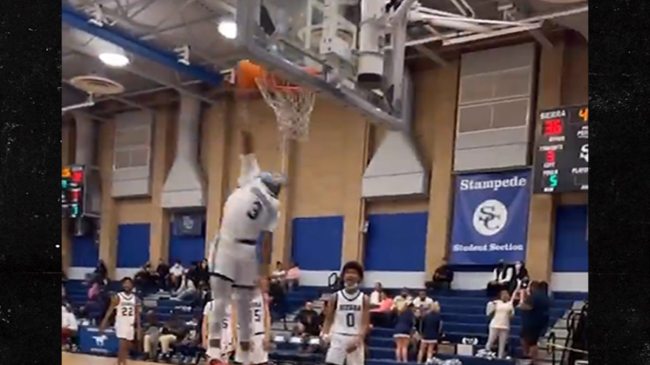 Let the speculation begin. LeBron James’ youngest son just dunked for the first time, which means it’s only a matter of time before the world starts trying to figure out what jersey Bryce James will be wearing in college.

The internet hasn’t reached that level of hysteria yet, but it’s clear from their reactions that they know it’s only a matter of time before Bryce joins his brother, Bronny as one of the nation’s most coveted recruits.

Bryce James first ever dunk!! In front of LeBron too! @KingJames pic.twitter.com/ohBiGrGhXJ

Bryce’s first dunk occurred during warmups for a game where he was representing Sierra Canyon High School. A proud LeBron James was front row and couldn’t wait to take to Instagram and show off his son’s accomplishment.

The people of Twitter can already see where Bryce’s career is going just after watching this video.

Proud dad moment!! His sons will continue his legacy!!

Next month he’ll be windmilling

Best Shooter in the Family too, gonna be scary.

Another 2 years and his head will be at the rim

It certainly looks like Bryce is getting ready to follow his father and brother into the spotlight. We should see college basketball’s top programs battling it out for his commitment any time now.

I just hope that when Bryce does start ascending to the top of the basketball world, he adopts the nickname “Duke of Cambridge” as second in line to succeed the King.