The St. Louis BattleHawks Capped Off Their First XFL Victory By Shotgunning Some Spiked Seltzer In The Locker Room 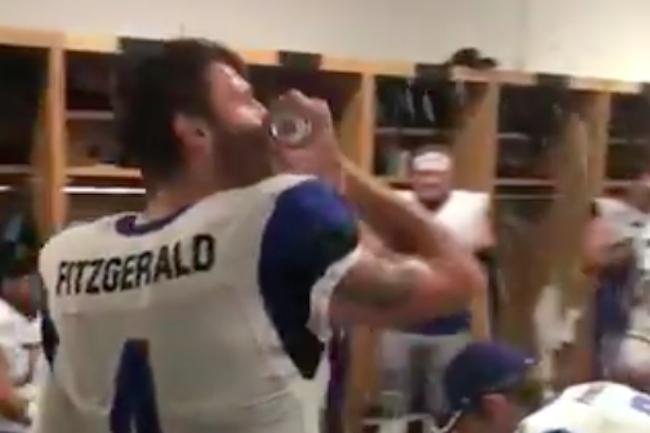 Football fans have traditionally woken up on the morning after the Super Bowl dealing with a couple of forms of withdrawal, as in addition to having to deal with the hangover that comes with going a little too hard on a Sunday night, the world is forced to come to terms with the reality that it’s going to have to wait over six months until it’ll be treated to some fresh action on the gridiron.

Last year, the Alliance of American Football set out to help us scratch that half-year itch when it kicked off its inaugural season, and while it initially looked like it could serve as a somewhat viable alternative to the NFL, it folded after an underwhelming eight-week run and we were yet again forced to cope with a football-shaped void in our hearts.

However, a glimmer of hope remained thanks to Vince McMahon, who whipped the football world into a frenzy a couple of years ago when he announced he was setting out to revive the failed experiment that was the XFL, which played its first and only season all the way back in 2001.

Only time will tell if the league will manage to fare better this time around, but based on how things transpired when the first slate of games was played over the weekend, it seems like it’s going to be capable of providing a pretty entertaining product both on and off the field.

After being abandoned by the Rams a few years ago, St. Louis found itself home to a pro football team again in the form of the BattleHawks, who secured their first victory with a 15-9 win over the Dallas Renegades on Saturday and proceeded to celebrate in style by crushing some spiked seltzers in the locker room.

There’s truly nothing better than watching some guys just being dudes.