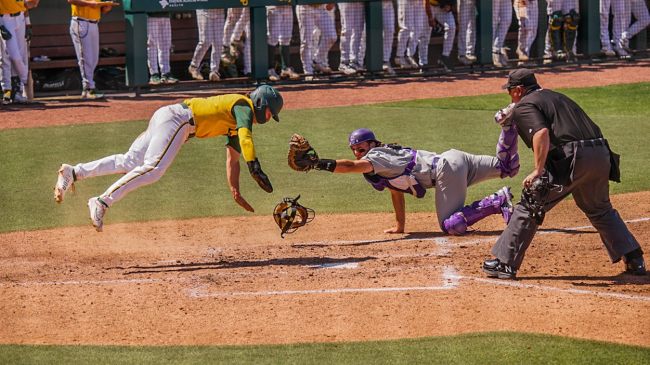 Baylor baseball began the year with extremely high hopes but have struggled to find a rhythm early in the season. At 9-9 through the first 18 games, the Bears won a series against No. 23 Duke and beat No. 9 LSU, but have also lost a game to Columbia and lost a series to Maryland.

On Sunday, after dropping the first two games of a series against No. 23 TCU, Baylor looked to bounce back and take one of the three games. Through five innings, that was the case.

The Bears scored four early runs to the Horned Frogs’ zero and one of the four came in spectacular fashion. It involved one of the craziest slides that you will ever see in the sport of baseball.

During the bottom of the second inning, Baylor had one runner on second with two outs. The batter got ahold of a 1-0 offering and drove it into the outfield and the man on second, Jack Pineda, tried to score from second.

As he was rounding third, it was going to be close. The TCU catcher caught the throw-in as Pineda started his slide to the place.

When the catcher swung around to try and save a run with a tag, Pineda used a ridiculous slide to somehow avoid the glove, dodge the tag, and score. Take a look at how it went down in real-time:

This slide is so awesome 🔥 pic.twitter.com/kQpcPGzPNU

If that wasn’t wild enough, it gets even more insane in slow-motion.