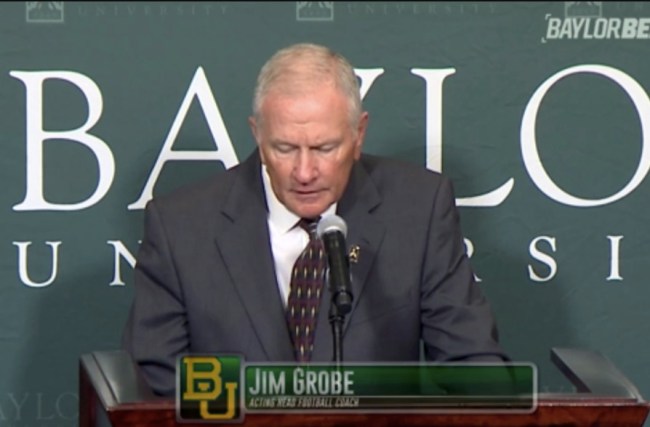 Jim Grobe took over as Baylor Football’s Head Coach in 2016, leading the Baylor Bears to their 7th consecutive bowl game, and finishing the season with a 7-6 (Win/Loss) record. Grobe took over for the beleaguered Art Briles after innumerable scandals rocked the program to its core.

Previously, Jim Grobe had been the longtime head coach of Wake Forest and ran the Demon Deacons program from 2001 to 2013, and he was even named ACC and AP Coach of the Year back in 2006 after leading Wake to an 11-2 regular season record that year.

You’d think that a man with a football resume as accomplished as Jim Grobe would have an extensive closet full of ties to be worn at press conferences, but when Grobe first took over as Head Coach of Baylor he only had one Gree and Gold (Baylor’s colors) necktie to wear. He wore the same necktie over and over, to every single press conference. Here’s that tie he wore into the ground:

He wore the tie so often that one Baylor Bro noticed what was happening and sent Coach Grobe a new Green/Gold tie, and he received this handwritten note back as a thank you: 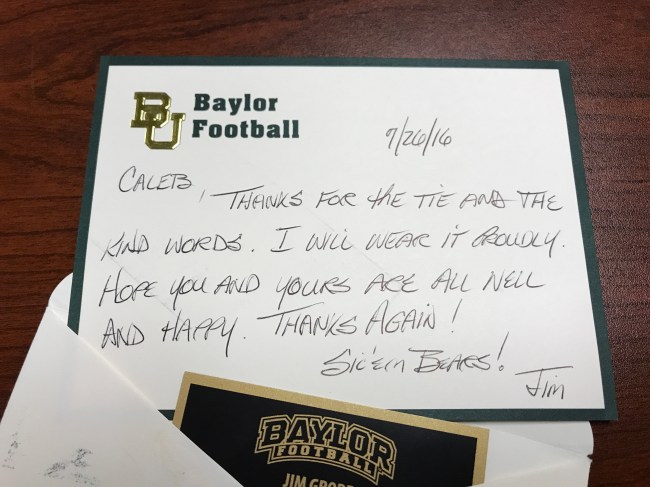 That’s a pretty nice note from the head coach, but did he actually wear the new tie? You’re damn right he did. The Baylor Bro that sent Coach Grobe the new Green/Gold necktie posted pictures of the head coach wearing the tie during a late-season press conference and during Baylor’s bowl game: 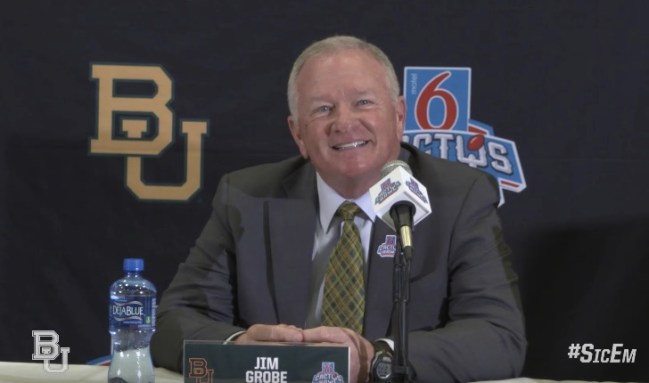 I don’t know anything about Jim Grobe that you can’t learn from being a College Football fan (and/or reading his Wikipedia page), but from what I’ve seen he seems like the right guy to turn Baylor’s football program around, assuming the NCAA doesn’t give them the death penalty in the near future.