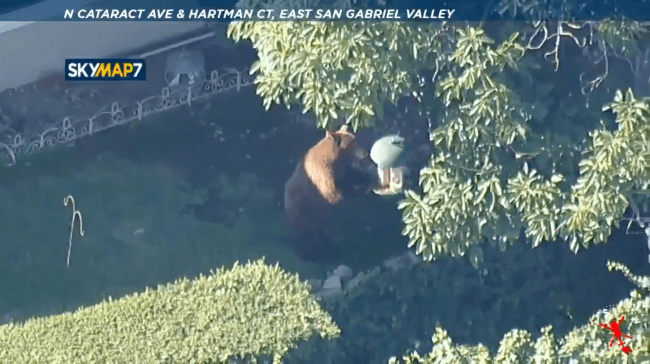 A brown bear was spotted in the foothills of the San Gabriel mountains in Los Angeles County, California early on Wednesday morning. The bear, which was first spotted around 8:00 by a school secretary at a local elementary school, prompted a temporary lockdown.

We don’t want any first graders stumbling into a giant bear, now, do we?

Not long thereafter, the bear moved onto another area and was seen roaming through a residential neighborhood in San Dimas. Los Angeles County sheriff’s deputies responded to the scene as the bear did what it pleased.

The curious mammal caused quite a bit of chaos. Upon arriving in a backyard, the bear had a bird feeder catch its eye and climbed up to pull it down.

After yanking it from the roof, the bear laid down and played with the feeder for quite some time.

But at some point, the feeder became a distraction and the bear moved on to actual birds. It walked over to the nearby aviary and tried to get in on the action, or perhaps have itself a snack.

After failing in its efforts to get into the caged bird sanctuary, the bear turned its attention back to the feeders. This time, however, it went after a different one that was hanging from a tree.

It had a hard time knocking it loose, but you can’t knock it for the effort.

With winter and hibernation season quickly approaching, the bear was rather intrigued by the bird seed. Meanwhile, residents inside the home were watching the bear through the window while countless others watched live on a stream from ABC7’s local chopper.

In response to the bear sighting, California Department of Fish and Wildlife was also called to the scene. As of 10:15am PT, the department was on the way and was looking for a plan of action.

The goal, obviously, is to get the bear back home safely. I love this bear.