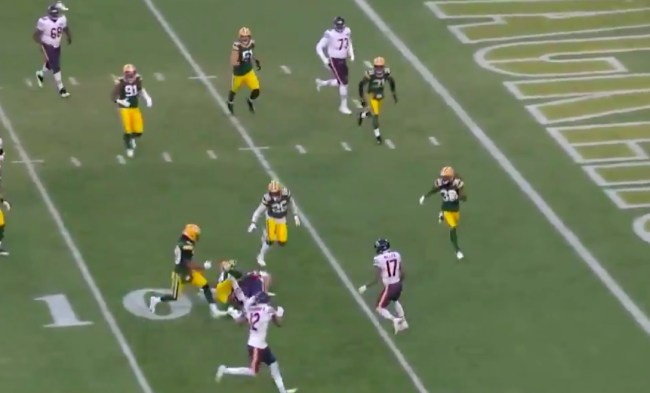 The Chicago Bears came into Sunday in desperate need of a win if they wanted to keep their (admittedly slim) playoff hopes alive but faced an uphill battle in the form of the Packers, who were listed as 4.5-point favorites ahead of kickoff.

Green Bay jumped out to an early lead and Chicago found themselves facing a 21-3 deficit by the time the third quarter came to an end. However, they managed to put 10 unanswered points on the board and were down by eight with possession of the ball and had one final chance to punch it into the end zone to help keep their season alive.

With one second left on the clock, the Bears had to figure out a way to march 36 yards down the field and cross the goal line and decided to resort to the classic “throw a bunch of laterals and see what happens” strategy.

Mitch Trubisky kicked things off by throwing a pass to Tarik Cohen, who managed to gain a few yards before tossing it back to his quarterback, and after Trubisky weaved his way around a few defenders, Jesper Horsted found himself with possession and scrambled toward the end zone.

It appeared Horsted had an opportunity to pitch the ball to a wide-open Allen Robinson—who had a pretty clear path to the end zone—but he was ultimately tackled and the pigskin popped loose before Green Bay pounced on it to seal the game and effectively end Chicago’s season.

The #Bears HAD Allen Robinson there for the touchdown.pic.twitter.com/KpjoCdzhyz

Of course, there’s no guarantee the Bears would have successfully pulled off the two-point conversion and they would have still had to win in overtime even if they had but this has to sting a little bit when you consider how close they came.