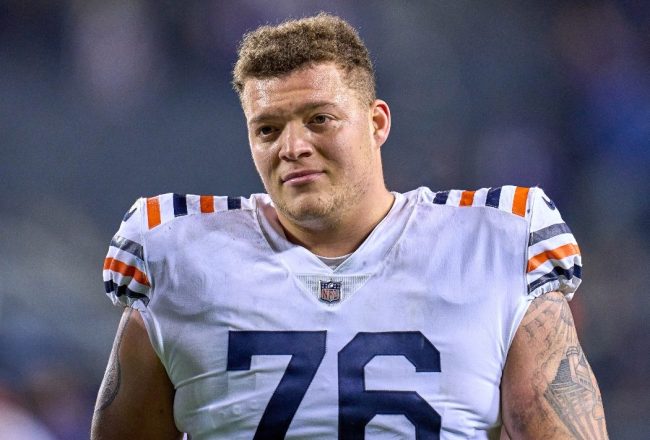 The Chicago Bears are doing everything possible to build a talented offense around Justin Fields. It’ll be interesting to see how the season plays out, as they don’t have a great offensive line or wide receiver core. Either way, all eyes are on Teven Jenkins right now, as the young lineman has struggled early in his career.

According to Courtney Cronin, Luke Getsy, the offensive coordinator for the Bears, has decided to move Teven Jenkins to right guard. Jenkins has had a difficult time adjusting to the professional level so far. However, Chicago seems optimistic that he will be a great fit for the right guard position.

Luke Getsy on trying Teven Jenkins at right guard: "The guards get stressed mentally more than the tackles in this system…that's the strength of his game…we want to try that and see what that looks like."

It’s a subtle move, however, it could pay off greatly. The Bears seem pleased with Riley Reiff’s production in camp as he’s pushed Jenkins to a backup role. Even so, Chicago is rather weak at right guard. For that reason, Teven Jenkins could help the team in a major way by stepping in at that position. Especially if he’s truly a better fit in this offensive scheme.

For that reason, we should expect to see a lot of Teven Jenkins in Chicago’s remaining preseason games. By the looks of it, he’ll be in direct competition with Michael Schofield III and Ja’Tyre Carter. If Jenkins can prove himself as a right guard, then the offensive line could drastically improve. If that’s the case, then the Bears’ offense could be much better than anticipated. That’s great news, especially considering Justin Fields is the future of this franchise.