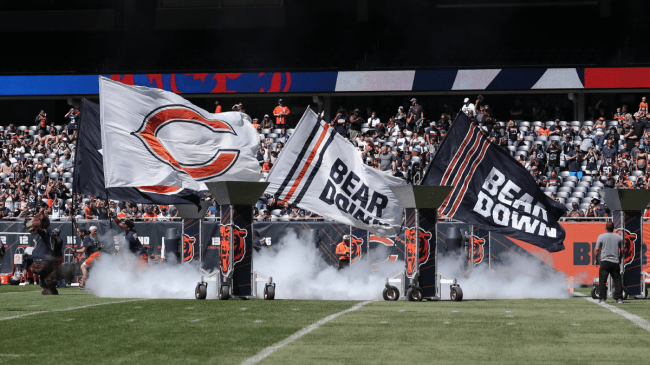 The Chicago Bears are dealing with a lot of field issues ahead of their 2022 season opener. Heavy rain conditions have turned historic Soldier Field into a swimming pool ahead of a Week 1 matchup with the 49ers.

The weather has made things hard for the groundskeeping crews, and it doesn’t appear that it’ll get any easier over the course of the game. The National Weather Service has a flash flood warning in place for Cook County and expects up to four inches of rain.

The franchise is attempting to unveil a newly sodded playing surface, but the recent downpours are throwing a wrench in those plans. Many are responding on social media with their reactions upon seeing the flooded football field.

Just puddles upon puddles of water, which the new Bermuda grass appears to be holding very well. The less-than-ideal conditions could make for a low scoring game between the Bears and Niners.

Luckily, the grounds crews are doing a nice job of clearing some of that water off the playing field. Unfortunately, there are a few other areas where the crew has failed.

Fans are mocking the Bears after seeing some rather shaky paint work done on the sidelines. It looks as though they were done by someone after a long night out.

Hopefully there won’t be too many players trying to toe those sidelines in a game that will probably see few offensive fireworks.

The Bears will try to battle both the weather and the 49ers as they look to start the season off with a win.