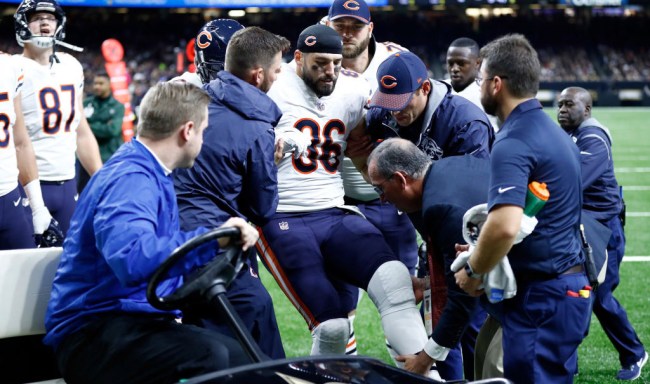 Anyone who saw Bears’ tight end Zach Miller’s dislocate his knee on Oct. 29 against the Saints doesn’t need a reminder of how ugly it was. For those who didn’t, congrats, you dodged a bullet. The injury likely ended Miller’s career, as he’s currently 33, and just underwent extensive urgent vascular surgery to repair artery damage after doctors feared he could lose his left leg. Doctors successfully completed a vein graft to save his leg.

Miller has spent the past eight days at University Medical Center New Orleans following surgery and was slated to return to the Chicago area yesterday.

In his first public statement since the injury, Miller posted a letter to his social media accounts thanking Bears medical officials, his surgeons and the hospital staff, and stayed positive about the long road ahead.

“I have been down before, and I will do whatever it takes to get back up,” he wrote.

Miller has had at least two surgeries and is slated to have additional procedures, including at least one surgery to repair the extensive ligament damage in his knee, the Chicago Tribune reports.

Best of luck to Zach and his family in healing physically and mentally from a scary injury.