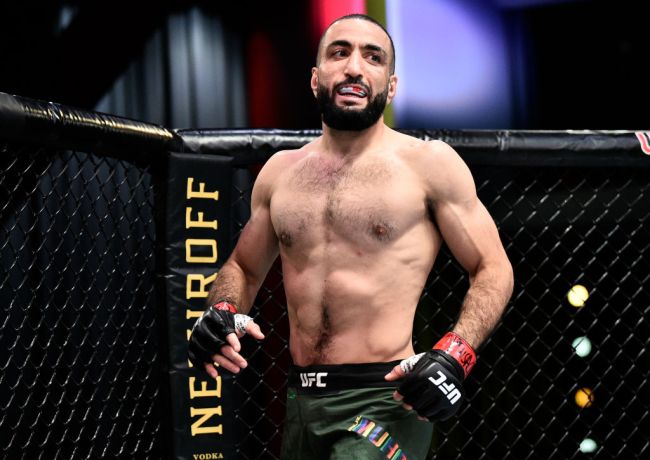 Today is kind of an important day for Belal Muhammad. Later on today, he’ll take on Vicente Luque in a rematch for what will be just his second UFC main event and hopefully his first one that doesn’t end with an eye poke.

Still, he might already be looking past tonight’s matchup.

He spoke with TMZ Sports and revealed that he’s already thinking about another opponent. Muhammad told them that he wants to be the one to end Khamzat Chimaev’s undefeated run.

“[Khamzat] fought with the #2 guy in the world in his 11th fight, so I think we learned how tough he is. I still think he’s a great fighter and a great challenge for me, cause he’s still undefeated now. I want to take his ‘0.’”

Muhammad has a tough test ahead of him tonight against Luque, but if he can get past it, he just might be the type of fighter who could give Khamzat trouble.

Last weekend, Khamzat fought Gilbert Burns in an absolute slugfest and we saw him start to tire after not being able to put Burns away. That could play right into Muhammad’s strengths.

Muhammad isn’t the UFC’s most athletic fighter and doesn’t possess devastating power in his hands, but the man has good cardio and absolutely refuses to quit inside the Octagon.

If Muhammad survived early on against Khamzat, he could certainly take over the fight late in a 5 round fight with his persistent striking and the wrestling game he displayed against Wonderboy Thompson.

First, he’ll need to avenge the KO Loss that he suffered against Luque back in 2016.