Will There Ever Be Another UFC Fighter Quite Like Ben Askren? 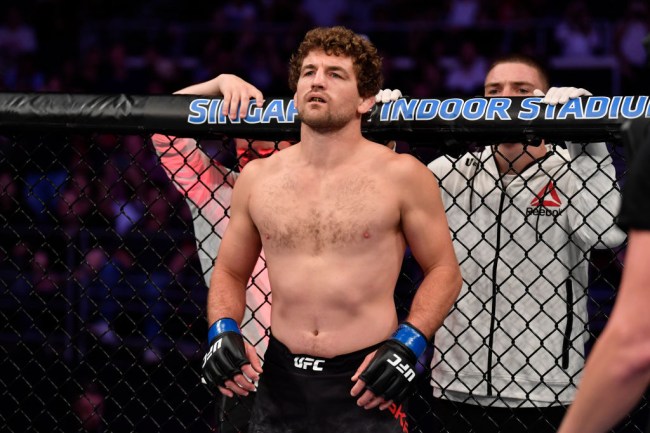 It’s tough to take any MMA or combat sports retirement too seriously, but this one seems like it’s going to stick.

On Monday, November 18, UFC welterweight and former multiple time world champion Ben “Funky” Askren officially announced his retirement from mixed martial arts. The news came suddenly during an interview on Ariel Helwani’ss MMA show on ESPN, and the media has collectively chimed in to praise Ben Askren for his contributions to the sport of mixed martial arts. There really was only one fighter like “Funky.”

Citing the need for an immediate hip replacement, Askren leaves behind a unique legacy. He’s one of the finest wrestlers to ever step foot in the Octagon, and while Askren only won a lone fight in the UFC, that victory, as controversial as it was, was essentially the finest moment of his decade long career. It was the moment that Askren was finally able to say he competed with the best fighters in the world, after working so long and hard to have his chance in the UFC.

A former Olympian and two time NCAA Division-I national wrestling champion, Askren had an unlikely ascension to the top. Once lambasted for his grinding wrestling style, Askren was vilified by fans and promoters for a lack of striking and entertainment value. However, what he lacked in terms of flash, he made up for with his mouth. It was not uncommon to hear “Funky” call it like he saw it, even if it was detrimental to his career arc.

Tearing through opponents with dominant takedowns and ground and pound, Askren won his first 12 fights, along with the Bellator world title, before his contract was not renewed by the promotion. At the time, Askren wanted a chance to fight in the UFC and face then-champion Georges St-Pierre, and UFC president Dana White was having none of it.

The spat with White became public, contentious, and, quite frankly, legendary, as Askren fired back insults at a man that most fighters are looking to gain favor with. The tactic didn’t result in a UFC contract, but it did make Askren a fan favorite, and he soon signed a deal with Singapore-based promotion ONE Championship. During the years in Asia, Askren won his second world title, racking up another six wins. It still wasn’t enough to get on the UFC’s radar, and “Funky” decided to retire in late 2017 after defending the ONE welterweight title for the third time.

BREAKING: @Benaskren has announced his retirement from MMA. (via @arielhelwani) pic.twitter.com/zHslLkCnFv

Traded to the UFC in exchange for former flyweight world champion Demetrious Johnson in November 2018, Askren would finally make his UFC debut in March 2019. His impact was instant, both inside and outside the Octagon.

One of the most quotable fighters in the game, Askren delivered soundbite after soundbite, racking up the clicks and views on websites and social media. He would show up to press functions wearing flip flops, while his contemporaries donned designer suits, taking every chance to joke around with president White.

His offbeat manner and personality truly lived up to the “Funky” moniker, and the wrestling remained world class. And whether or not Robbie Lawler was truly unconscious when referee Herb Dean waived off a bout on the UFC 235 PPV main card, awarding the stoppage victory to Askren, the win was as exhilarating as it was controversial. Ben Askren was a UFC fighter on a winning streak, inching towards a title shot and the fanbase took notice.

The high would be short-lived.

Losing his next two bouts by stoppage, Askren made the UFC record books for all the wrong reasons this summer, losing the Jorge “Gamebred” Masvidal via flying knee in just five seconds. Being on the wrong end of the fastest knockout in UFC history didn’t sour or silence Askren, however. Instead, he was open and vocal about the loss. It was yet another act that endeared him to the MMA fanbase, which embraced Askren’s blue collar work ethic. Ironic, since “Funky” rarely dressed up to levels constituting business casual, leaving the collars behind in favor of a worn out t-shirt.

Askren took the defeat in stride, as he did a few months later after suffering submission loss to Demain Maia at a UFC event in Singapore. Owning his shortcomings became as much of a hallmark of Askren’s career as the single-leg takedown and chain wrestling against the cage. Unfortunately, MMA promoters don’t give out championship belts for being a good loser, commendable sportsman, or class act because Askren would win gold in all three categories.

Despite having already come out of retirement once before, it really feels like this is it for Ben Askren. The hip replacement sort of ensures that “Funky” will stay retired and focus on his first love, wrestling, and the schools he owns in Wisconsin. And while Askren never quite achieved his ultimate goal of hoisting UFC gold, he leaves behind a legacy of greatness that will never be matched. He was a true original, in both the athletic and entertainment sense, in a sport rife with clones and copycats.

Here’s to you Ben Askren. Thanks for the cheese. Catch ya later.