Ben Roethlisberger Is Reportedly Focused On His Diet And Losing Weight, Which Is Hilarious In Year 18 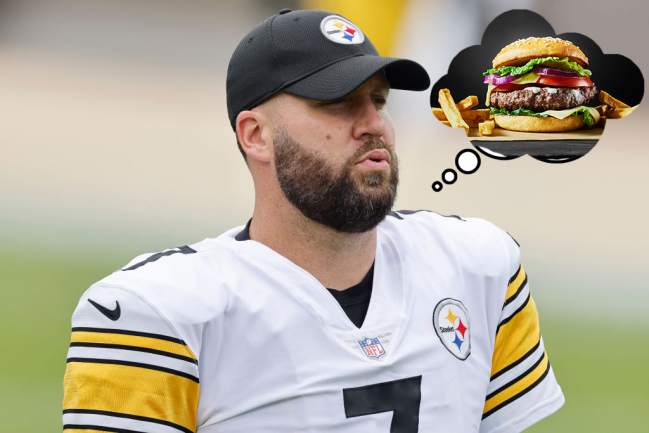 Steelers quarterback Ben Roethlisberger has never been the poster child for pristine shape or an incredibly cut physique. The 39-year-old has played most of his 18-year career around the 240-pound mark.

According to Ryan Burr, that is set to change in 2021. He is reportedly focused more than ever on his health.

“Ben camp says biggest concern is weight loss,” Burr tweeted. “He has been so driven since [the] season ended. Source says his diet is stricter than [Tom] Brady.” (Maybe it’s as strict. It’s harder to imagine it being even stricter than the TB12 method.)

Additionally, Roethlisberger’s camp is saying that he’s in the “best shape of his life.”

While 99% of NFL players will say that entering the summer training camps, all signs point to a shift in Big Ben’s offseason routine.

For him to change everything about the way he eats and workout entering what could be his final year in the league is hilarious. It’s not to say that it’s too late for him to flip the switch on his offseason, but it’s certainly an interesting time to do so.

Roethlisberger is not a small man. He has played big his entire career and has taken a lot of heat for it. Over the past 18 years, the former Miami of Ohio standout was the butt of many jokes.

He has been deemed responsible for many of Pittsburgh’s shortcomings, and his reputation has always been as an out-of-shape athlete.

After 18 years, the media, the internet and both Steelers and NFL fans across the country have finally cracked Roethlisberger. He can’t take the bullying anymore and is set out to completely overhaul himself for what is likely one last ride.

Find me an athlete and professional sport that gets blamed for everything as much as BR? From source in Roethlisberger camp he is tired of it. His ego is tired of it. If Steelers don’t run ball it’s because BR only wants shotgun. If OL has trouble BR holds ball to long. https://t.co/gVGTsVLWG5

Big Ben’s decision to change everything after 17 years is like getting in the gym two weeks before spring break. It might help some, but it won’t rid your body of years and years of burgers, beer and reputation.

Everything is riding on Roethlisberger’s performance in 2021.

The Steelers are 3-6 in playoff games since losing the Super Bowl in 2010. They’re coming off of a late-season collapse behind that of Roethlisberger. Roethlishberger has played only one full season in the last six years. The offense is loaded with weapons and ready to explode.

If Pittsburgh can’t make a deep playoff run this year, it will be a let down. You know that, I know that and the Steelers know that.

Most importantly, Big Ben knows that, which is why he’s undergoing a body transformation at the mercy of constant pressure and tormenting. Stay tuned.